The President has set aside about Sh22.5 billion for completion of his flagship projects ahead of polls

• Treasury is seeking the approval of Parliament for the budgetary provisions in the first supplementary estimates. 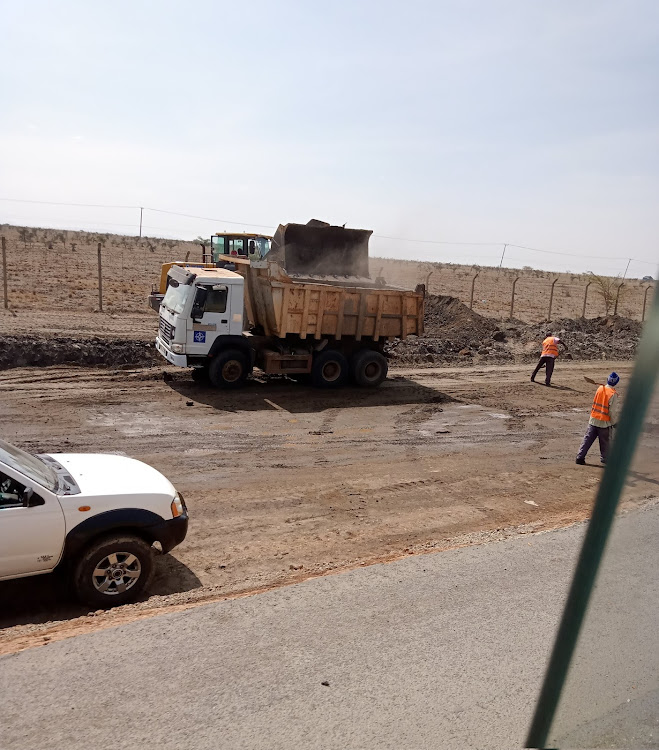 LEGACY: Dualling of the Eastern Bypass in progress.
Image: HANDOUT

President Uhuru Kenyatta has set aside about Sh22.5 billion for completion of his legacy projects ahead of the end of his term in August.

The President seeks to complete roads and water projects in informal settlements as well as key infrastructure projects that mark his term in office.

In this regard, Treasury is seeking the approval of Parliament for the budgetary provisions in the first supplementary estimates, some of which have been spent on the ventures.

The government has also set aside Sh1.5 billion for the rehabilitation of the Naivasha-Malaba Meter Gauge Railway whose environmental impact assessment is currently underway.

President Kenyatta’s administration has also set aside Sh1 billion for the construction of a neuropsychiatric national teaching and referral hospital.

Also in the package is Sh1.5 billion for the construction of Level 3 hospitals, most of which have been put up in informal settlements.

The head of state is also keen on the completion of the country’s first human vaccine manufacturing plant with the allocation of Sh1 billion towards its establishment.

Roads have taken a chunk of the additional allocations among them the Sh2 billion for construction of Eastern Bypass and the Sh1.9 billion for Garissa-Isiolo road.

In line with the ongoing facelift of Mombasa, the Jubilee administration has provided about Sh1 billion for the Makupa Causeway bridge.

To beef up efforts to change the face of informal settlements, the government has provided Sh1.4 billion for roads in the said areas.

In line with his pledge to improve tea, coffee, and sugar sectors, the Jubilee administration has provided in the supplementary budget Sh3.5 billion for crop development.

Of these, Sh1 billion would go towards fertiliser subsidy for tea farmers, Sh1.5 billion for sugar sector reforms and Sh1.0 billion for the coffee subsector. The monies have been disbursed.

On energy, the National Treasury has provided Sh3 billion for repayment of loans extended to Kenya Power under the electricity connectivity projects—best known as the last mile connectivity.

On Housing, which is part of the Big 4 agenda, the Treasury has allocated Sh3.2 billion more and Sh3.5 billion towards the Kazi Mtaani project.

The projects have taken a centre stage in President Kenyatta succession race where ODM leader Raila Odinga and DP William Ruto are frontrunners.

The two have been embroiled in public exchanges on who should take credit for the Jubilee projects.

Ruto has on many occasions sustained attacks for attempting to take credit for the projects and criticising the same.

Raila, on the other hand, argues that the DP frustrated the president's efforts to develop the country and that his handshake worked the miracle.

Recently, Nyeri Town MP Ngunjiri Wambugu said they would not allow the DP to take credit for the milestones.

“When it is convenient, Ruto has been claiming to have contributed in the infrastructure development projects going on in the country, notably the SGR,” Wambugu said.

“He must make up his mind. Is he part of the Jubilee administration or not. If not, Ruto must stop going around the country claiming he is a tested leader as ‘tumejenga barabara, SGR, tukasambaza stima’,” the MP said.

The additional allocations were among those that headlined the extra Sh126 billion budgets.

In line with the president’s commitment to cheaper fuel for Kenyans, the government has provided substantial resources with Sh24 billion provided so far.

In the increment, the National Treasury is spending about Sh38 billion to bailout Kenya Airways, Kenya Power and universities.

KQ has been allocated a chunk of the additional amount at Sh26 billion, Sh3 billion for Kenya Power and Sh8.5 billion in cash boost for public universities.

Treasury also wants Sh14.9 billion more for the Ministry of Health, a chunk being expenditure on Covid-19 vaccines and hospital upgrades.

The Independent Electoral and Boundaries Commission has been allocated an extra Sh8.8 billion for managing the August general election.

The Defence ministry was also among the top gainers with the allocation of Sh15 billion for security support and salary shortfall related expenditures.

Yatani has also sought approval for Sh3.3 billion more to State House. Sh1.8 billion for operation and maintenance and Sh1.2 billion for the Nairobi Metropolitan Services.

The basic education budget has also been upped by Sh3 billion to cater to school feeding programmes in primary schools of which Sh392 million will go to secondary schools.

Yatani seeks MPs approval for monies spent in line with law allowing prior use
News
6 months ago
by MOSES ODHIAMBO Journalist and Political Writer
News
02 February 2022 - 23:00