The deal seeks to promote good relationships with the public through sports.

• Deputy IG Edward Mbugua said the sponsorship has offered Kenya Police a huge relief from a big-budget it is required to cater to all its sporting activities.

• The signing and handover of the cheque was done at Jogoo House, Nairobi on Tuesday. 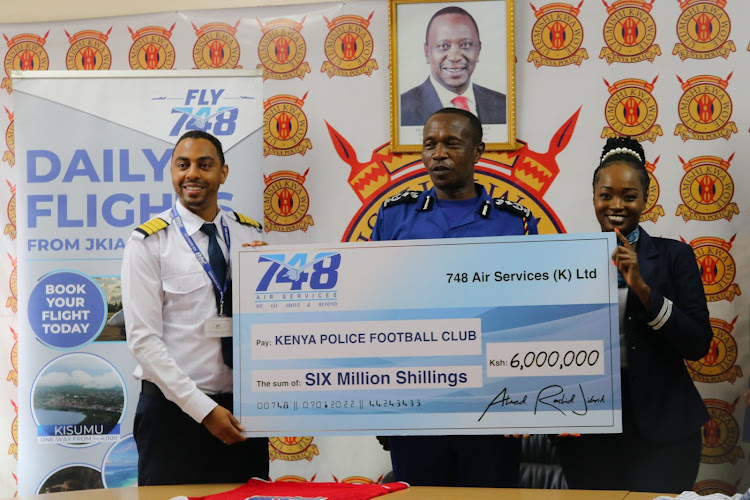 Fly 748 has given the Kenya Police a boost to promote good relationships with the public through sports after signing a one-year sponsorship deal valued at Sh6 million.

While signing the cheque in Nairobi on Tuesday, Fly 748 Managing Director Moses Mwangi said the sponsorship will enhance police efforts to reach out and improve ties with a much bigger population in their bid to strengthen community policing.

The signing and handover of the cheque was done at Jogoo House.

“As part of our CSR, we are much interested in sports sponsorship because it brings people together, and what a better team to partner with than the people who take care of us, who are in charge of security,” Mwangi said.

Mwangi added that security and safety are cardinal in the aviation sector.

"Everywhere we fly to, the first people we meet are the police. We are very excited to partner with and sponsor Kenya Police FC.”

The sponsorship will also extend to subsidizing air tickets for the football club.

Deputy Inspector General Edward Mbugua said the sponsorship has offered Kenya Police a huge relief from a big budget required to cater for all its sporting activities including hockey, Karate, and Tae Kwondo.

Mbugua added that sometimes they can only afford to give these teams lunch and that the deal came in handy.

Since last year, the airline has been on an aggressive domestic routes expansion.
News
1 year ago

New route to help more domestic travellers to experience the best of Malindi.
Business
1 year ago
Post a comment
WATCH: The latest videos from the Star
by KEVIN CHERUIYOT Online Journalist
News
01 February 2022 - 19:22
Read The E-Paper