OKA will form coalition with like minded parties - Kalonzo

Kalonzo said their intention of inviting more parties to work together was within the law.

• He said they will work with Gideon and Karua in mobilising for votes ahead of the August 9th presidential poll. 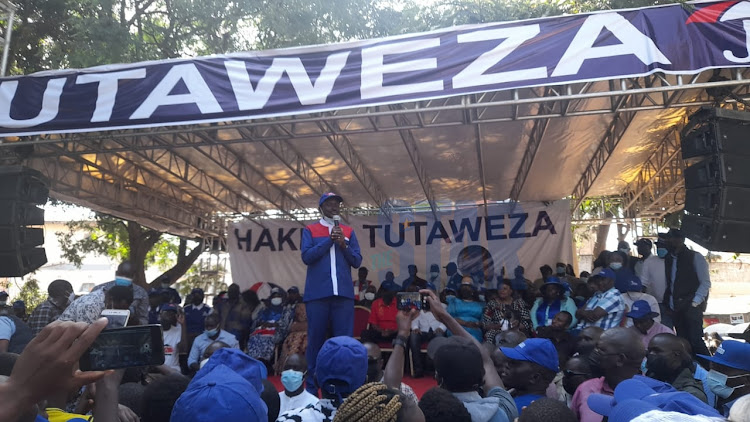 Wiper party leader Kalonzo Musyoka has said the One Kenya Alliance will form a coalition with like minded parties.

"We will do coalitions with other people, parties. Coalition isn't bad, we will get into coalition with others for sure, " Kalonzo said.

Kalonzo said their intention of inviting more parties to work together under coalition arrangements with the intention of forming the next government, was within the law, the newly enacted political parties act.

He said they will work with Gideon and Karua in mobilising for votes ahead of the August 9th presidential poll.

Kalonzo praised the two leaders stating that they were principled.

"You stand for principles. Some have problems with their own minds, capacity to think straight," Kalonzo said.

"We will actually be forgiven for walking out of a presidential candidate's launch. It wasn't out of cowardice. You can't call us saying you are running for president and the next thing you are doing is giving it away," Kalonzo said.

This was in reference to when they walked out of Mudavadi's function at Bomas in Nairobi last Sunday.

Kalonzo accused the ANC leader for inviting Deputy President William Ruto to his function without informing them, Gideon and himself.

"I'm sure most of those ANC delegates walked out in shock. I saw Ruto's sit next to mine and Gideon's, we ought to had been informed that he had been invited, " Kalonzo said.

Kalonzo said OKA will field candidates in all political positions from MCAs to governors with himself as the coalition's presidential candidate.

Dispelling the two horse race notion in the 2022 presidential race, Karua said Kenya has a rich menu of leadership.

"Kenya has a rich menu of leadership and among these leaders here, there is the fifth president of Kenya, " Karua said.

The leaders exuded confidence that Kalonzo will get to the ballot as a third political force in the presidential race and emerge the winner.

Ukambani leaders said they had released Kalonzo to go campaign in other regions across the country.

Gideon said that as KANU, they will stick with OKA and support Kalonzo.
News
1 year ago

OKA in Machakos to mobilise residents to register as voters