How woman defied disability to start knitting school, be own boss

Njoki quit her job early last year to try her luck in self-employment.

• Njoki says many people underestimate her skill due to her disability.

•She spends most of her hours at her shop while training her students and knitting sweaters. 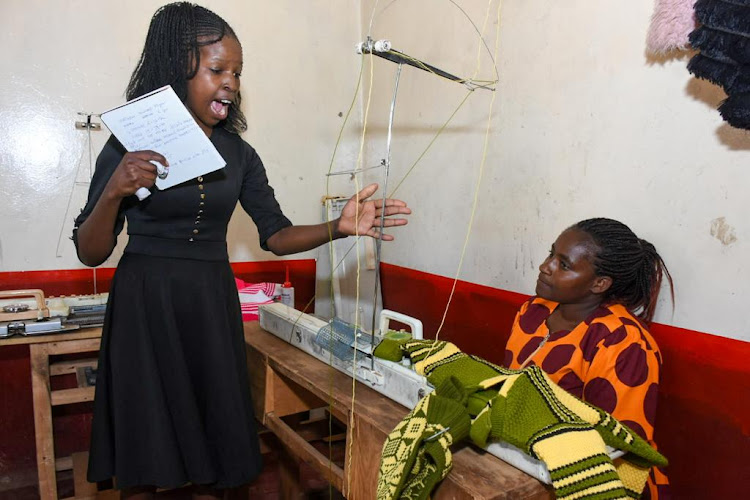 A 27-year-old woman from Thika had vowed not to allow her condition to stand in the way of achieving her dreams.

"Ever since I got employed, I have always wanted to own school,” she says.

“But most importantly, I wanted the opportunity where I could be my own boss. I achieved that dream last year," she says proudly.

Njoki was born with a physical disability and a speech impairment.

"I am physically challenged but differently-abled. I walk but with difficulty. I also struggle to talk," she says.

Njoki, with help from wellwishers, was able to buy a knitting machine and start her training college in Kiganjo area.

She spends most of her hours at her shop training her students and knitting clothes for clients. 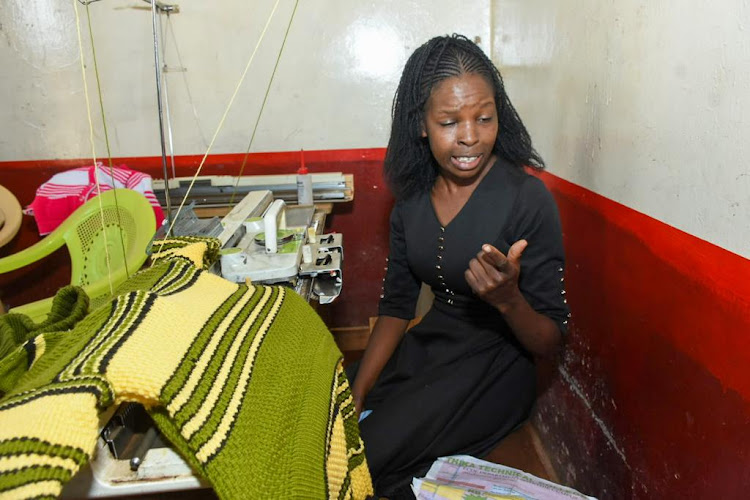 Rhoda Njoki at her shop in Kiganjo, Thika on January 20, 2022.
Image: MERCY MUMO

When we arrived at her shop, we found her instructing her student, Purity Musyoka, who keenly looks on as Njoki knits.

Occasionally, she asks questions to better understand the craft.

"What if I want to use different colours for the sweater?" She asks.

With a little difficulty, Njoki shows her how to use two different colours of yarn at the same time to make a beautiful sweater.

Her shop is adorned with skillfully made sweaters, hats, socks, shawls, scarves, and many other woolen clothes that are on display for her clients and visitors to see when they come to the shop.

But according to Njoki, the sales at the shop have been dwindling for the past few weeks.

“When schools are about to open, that’s when we see the most sales at the shop. In a good month, I can knit and sell sweaters, scarves and marvins and make more than Sh4,000 in profits,'' she said.

Njoki is a social person, a trait she says allows her to spread the word about her business and her school, The Sunshine Training College.

“I go around asking people if they would like me to knit something for them. And if they have a special occasion coming up, I could make them a sweater or whatever they want. I usually direct them to visit Rhoda shop,” she says.

Most of her clients, she says, come from within Kiganjo, and they often make orders for school sweaters and knitted suits for newborns.

“I charge between Sh350 for small sweaters to Sh600 for large sweaters. Sometimes when I am unable to afford the yarn, we reach an agreement with the client so that I do not incur losses,” she said.

Njoki’s clients are very important to her such that despite her disability, she goes out of her way to deliver her finished products personally to them.

Esther Wachira, a businesswoman in Kiganjo, said she ordered a school sweater for her Grade Two son in December, and Njoki brought it to her house.

“She is very committed to her work. I was not expecting her to deliver it, but she did. The sweater itself was very well made. I regretted having doubted her capabilities,” she said.

Njoki says that many people underestimate her skill due to her disability, but she is constantly working to prove them wrong.

“Even when I tell people to recommend students to me so I can teach them how to knit, they are always skeptical,” she said.

Musyoka, her current student, is full of praise for Njoki.

“Njoki is a very good teacher. I have been here for five months now. By the third month, I had known how to knit a decent sweater,” she said.

She charges each student Sh5,000 per term (three months). With the fees and the profits from her shop, Njoki hoped she would be able to sustain herself.

She admits that it has been difficult for her business to pick up as she has only had two students since she opened the school in April last year.

“When I was still employed, I had at least 10 students every three months, but now, I have only had two. One of the students dropped out to go back to her job. She had been temporarily retrenched when the Covid-19 pandemic hit," she said.

Musyoka, on the other hand, is unable to constantly pay for training fees.

They worked out an agreement to split the profits from the sale of sweaters they make together.

Njoki fears she might have to give up on her dream of being independent because she can no longer support herself.

"Friends and well-wishers donated these machines. So many people supported me, and I do not want to let them down," she said.

With society always perceiving people with disabilities as helpless, Njoki said she hopes to continue working to become self-reliant.

Njoki's sister had supported her since their mother died when Njoki was still young.

“My sister saw me through high school and college. She even paid for my rent and upkeep when I was establishing my school and business,” she said.

With business slowing down and the number of students reducing, she might have to quit and go live with her sister again.

"I have worked so hard to get here and prove everyone wrong, but with the situation, I am unable to achieve my dreams," she said.

Njoki pleaded with the public to refer students and clients to her school and shop so that she could get back on her feet.

"I am a very able-bodied individual, and I can depend on myself. I need to get the opportunity to do so," she said.

Many PWDs in Meru face stigma, torture from parents

South Imenti coordinator says children with disabilities need to be taken to schools to learn skills for self reliance
Counties
4 months ago
by SELINA TEYIE
News
27 January 2022 - 14:14