Mudavadi said Kenyans will not accept government projects in politics.

• Mudavadi said Kenyans will not accept government projects in the political arena.

• He also said that the Constitution of Kenya allows freedom of association and expression among its citizens. 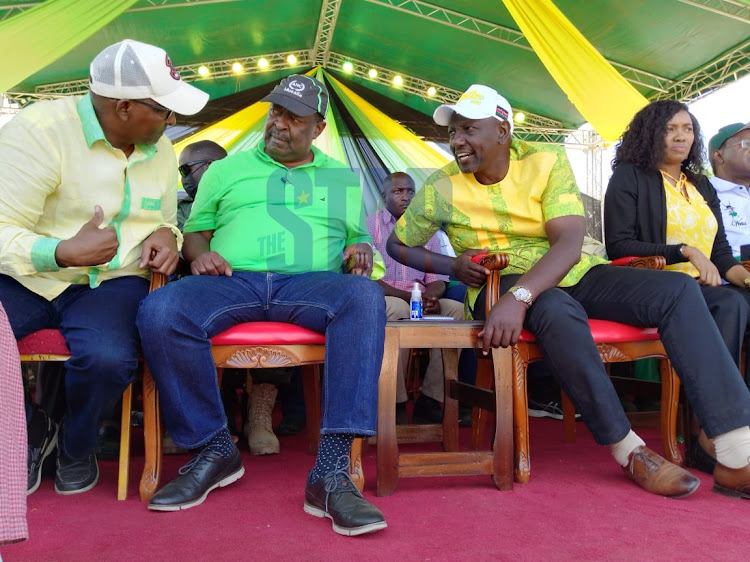 Mudavadi said Kenyans will not accept government projects in the political arena adding that they should be allowed to make their decisions.

The Azimio is seeking to strike a deal with the ruling Jubilee party ahead of the August 9, elections.

The ANC leader also hit out at One Kenya Alliance principals who walked out of his party's National Delegates Conference on Sunday at the Bomas of Kenya.

“Kama wewe ulimkosea Ruto, usinilazimishe mimi nimkosee Ruto (If you severed ties with Ruto don't force me to do him wrong),” Mudavadi said.

He said his move to join Ruto’s side is a step to change Kenya's democracy.

He said that the Constitution of Kenya allows freedom of association and expression among its citizens.

He also responded to President Uhuru Kenyatta’s comments that he was disappointed by his move.

“Mr President, you have a right to be disappointed with me. But, I want to tell you: Kenyans are even more disappointed in you. They are hungry, they are tired. Let's not lie to each other.”

Gatundu MP Moses Kuria has also described Azimio as a failed project that is doomed to fail.

In a social media post on Wednesday, Kuria said the movement has no future.

"Azimio is a bad idea, fronted by the wrong people, for all the wrong reasons. Its fate is Jehanum and Judgement Day is here," Kuria said.

His latest remarks come as a surprise to many who were speculating that he could join the Azimio movement soon.

Azimio is a bad idea, its fate is Jehanum - Moses Kuria

Kuria said the movement is doomed to fail.
News
5 months ago