Karanja announced her entry to the UDA party at the Nakuru UDA rally.

• She said after lengthy consultations with friends and family, she has resolved to join UDA. 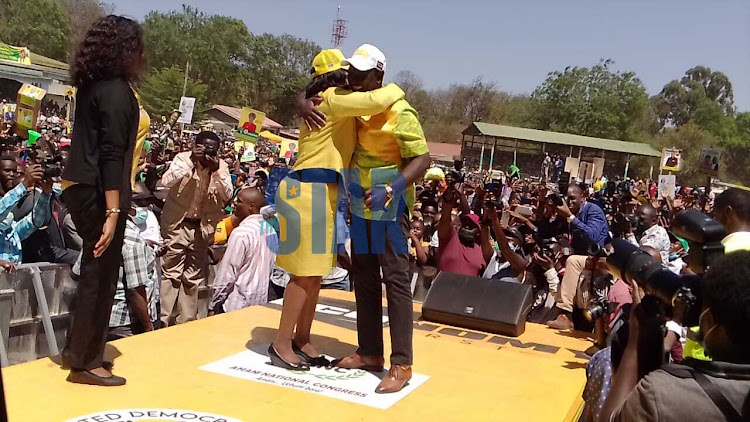 Keroche founder Tabitha Karanja will vie for the Nakuru Senatorial seat on a UDA ticket.

Karanja announced her entry to the UDA party at the Nakuru ASK ground where Deputy President William Ruto is having a mega rally alongside ANC's Musalia Mudavadi and Ford Kenya's Moses Wetangula.

She was welcomed into the stage by the current Nakuru Senator Susan Kihika who described her as a resilient and hardworking woman who will transform Nakuru into a business hub.

During her speech, she said after lengthy consultations with friends and family, she has resolved to join UDA.

“For months we have been involved in consultations with close friends and I feel it’s time I gave this seat a shot,”

The 57-year-old is the founder of the Naivasha-based brewery.

Tabitha in 2010 received Moran of the Order of the Burning Spear (MBS) from President Mwai Kibaki.

She is currently in a protracted court battle with KRA over tax returns targeting some of her company’s popular brands.

Addressing the press in Naivasha a while back, Tabitha Karanja noted that for years, investors had been locked out of the market or bullied due to harsh laws and unfair business practices.

“I have been at the centre of the unfair business practices and given a chance I would introduce laws that would protect investors and increase business opportunities,” she said.

The Nakuru gubernatorial and senatorial contests will be the races to watch.
Siasa
5 months ago

The Nakuru gubernatorial and senatorial contests will be the races to watch.
Siasa
5 months ago

The government should be consistent in its manufacturing talk
Opinion
2 years ago
by MANNY ANYANGO Digital Journalist and Social Media Executive
News
26 January 2022 - 14:52