The number of suspects interrogated over the matter now raises to 10.

• The number of suspects interrogated over the matter now raises to 10. 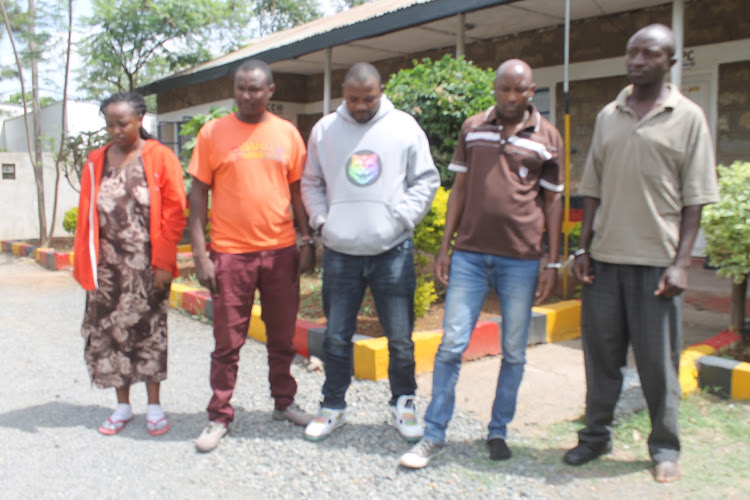 The number of suspects interrogated over the matter now raises to 10.

A senior detective told the Star that the four were separately arrested in Naivasha, Nakuru county, and taken to Athi River police station in Machakos county for questioning.

“All the four were escorted by our officers to Athi River police station where they all recorded their statements,” he said.

The sleuth said the four, together with the six other suspects earlier arrested in various counties, will be presented in court on February 2 where they are expected to take a plea.

The accused persons are held in Athi River and Kiserian police stations in Machakos and Kajiado counties respectively.

They are all detained at Athi River police station after a miscellaneous application made by police at Mavoko Law Courts to hold them for 14 days to complete investigations was granted.

The sleuth said they had dismantled the stock theft syndicate that operated within and outside Machakos county.

“We haven’t heard of any stock theft incidence since we nabbed these suspects,” he said.

He said the cartels were involved in businesses in Machakos, Makueni, Kajiado, Kiambu and Nairobi counties.

Cattle stolen from Machakos are at times slaughtered in bushes and meat transported to various butcheries located in the above-listed counties, or transported to slaughterhouses in Dagoreti or Naivasha.

“From the onset, we were convinced that this was an organized crime that was being carried out by a cartel,” Athi River Sub-county police commander Anderson Njagi earlier said.

Njagi said they had put the cartels on their radar for some time.

He said they made the arrests after intensive investigations with the help of the Athi River DCI detectives alongside their counterparts from the Forensic Investigations Department at the headquarters.

“On the night of December 16, 2021, we lost 15 herds of cattle stolen from Portland village within Athi River. We were able to place the six suspects at the scene of the incident,” Njagi said.

Njagi named Hilau as a Masaai who hails from Oloitoktok but lives in Kitengela town in Kajiado County. He is accused of being the cartels’ spy and conduit.

Macharia is the driver of a Mitsubishi lorry KBG 876 K used to transport the 15 herds of cattle from Athi River to Naivasha according to Njagi.

The vehicle has been impounded at Athi River police station to be used as one of the exhibits in court.

He said Njega aka Sonko, who was arrested in Ruiru, is the cartels’ suspected financier. He allegedly finances all the illegal businesses the suspects are involved in.

“We have additionally established that a number of these suspects including Njenga have several pending cases in courts within Kajiado, Matungulu, and Athi River,” Njagi said.

Njagi said they will consolidate those cases into one.