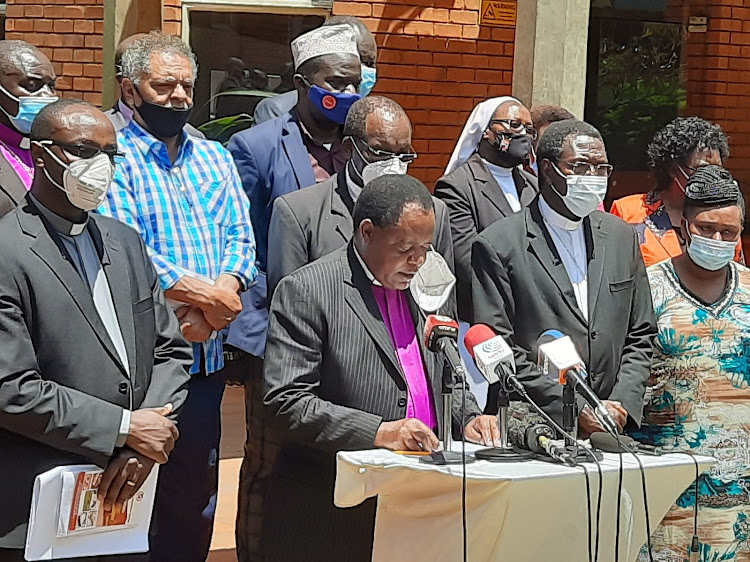 Religious leaders have sounded a warning, saying the country is not ready for the general election.

A two-day meeting of clerics in Nairobi on Thursday resolved to call Kenyans to prayer and fasting so God intervenes and safeguards the lives and well-being of all citizens.

The Independent Electoral and Boundaries Commission has already set August 9, 2022 as the day of the general election.

"The convocation is deeply concerned that the nation is not ready for the elections."

"Corruption, impunity, lawlessness, insults and incitement to violence are happening with abandon and Kenyans are sinking into despair and desperation," the clerics said in a statement after the meeting.

"It is a great pain for Kenyans that political leaders have deliberately neglected to address the issues of electoral justice which exposes the nation to a repeat of the crisis witnessed in the past," the clerics said.

The clerics said they will reach out to President Uhuru Kenyatta and asked him to keep off succession politics.

They said the President is a symbol of national unity and should refrain from partisan politics.

"We have also resolved to reach out to Deputy President William Ruto and other state officers to point out claims that they are using public resources to campaign," they said.

The convocation noted that cases of hate speech and incitement to violence were increasing and warned political actors will foment violence before, during and after the elections if the trend is not stopped forthwith.

"We will designate religious leaders tto provide pastoral support  to political actors and also motivate them to be controlled in their sentiments."

Religious leaders also raised concerns with electoral laws, some of which are pending in Parliament.

They cited the the Campaign Financing (Amendment) Bill 2020 and Political Party Primaries Bill which are yet to be dealt with.

"We have committed to engage parliamentarians at the local level to mobilise them to prioritise election-related laws."

The clerics said IEBC must be supported to deliver credible, free and fair elections.

"We will seek an appointment with the Inspector General to emphasise the on protection of election officials and immediate arrest and prosecution of perpetrators. The physical assault on election officials in Dagoretti North, Vihiga, Mandera, Kisumu and Matungu must never be repeated," they said.

The clerics are also concerned with the security situation across the country.

They said institutions mandated to secure the country were 'progressively losing control.'

"The violence in Lamu, Laikipia, Kerio Valley, Marsabit, Samburu, Isiolo and the dozens of bodies retrieved from River Yala are a pointer to this," the statement said.

They said it was not good that police have been accused of favouritism, disregard of the rule of law and gross human rights abuses just months to the elections.

The religious leaders committed to meeting Interior CS Fred Matiang'i to discuss security arrangements before, during and after the polls.

The clergy also decried lack of civic and voter education saying it was the weakest link in the country's democratisation process.

They said lack of information was fueling voter apathy.

They want more young people enlisted as voters and sensitised so 'they don't abscond elections or vote for the rich instead of qualified candidates'.