Assure Kenyans that you will accept defeat, Ruto tells Raila

The DP said hustler movement will not succumb to threats, blackmail and intimidation

"The only thing I ask my friend Mr Raila Odinga, is to accept defeat and should not cause violence or swear himself in after the August 9, General Election," said Dr Ruto. 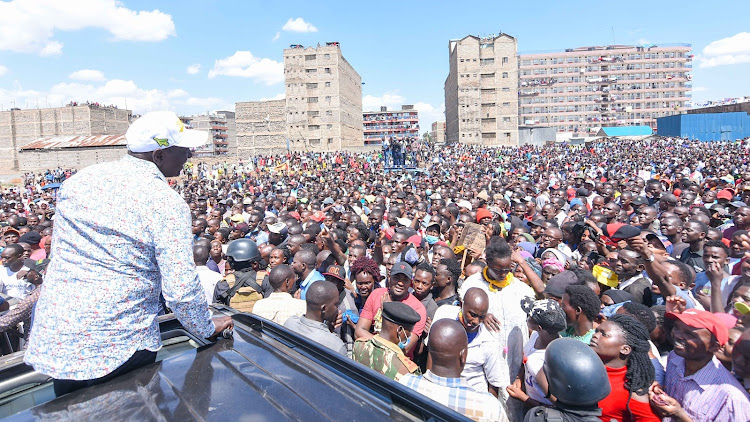 Deputy President William Ruto has urged Opposition leader Raila Odinga to assure Kenyans that he will accept election results if he loses the August elections.

Dr Ruto asked Odinga not to mobilize his supporters to cause violence during the campaign period and after the election if he loses.

"The only thing I ask my friend Mr Raila Odinga, is to accept defeat and should not cause violence or swear himself in after the August 9, General Election," said Dr Ruto.

The DP said leaders and supporters of the Hustler Movement will not succumb to threats, blackmail and intimidation employed by their detractors to manage the country's politics.

"You have been threatening us for the last four years. Those threats have amounted to nothing," said Dr Ruto.

The Deputy President urged his competitors to stop duping youth with handouts, saying it was an insult to the millions of educated and hardworking youth seeking jobs among other opportunities.

Ruto challenged Odinga to come up with practical solutions to unemployment and poverty in the country.

"Please, respect the youth of Kenya. These are not people to be given handouts. They want jobs and business opportunities," he said.

Ruto said he will implement projects and programmes that will create jobs and opportunities for the youth.

The MPs asked Odinga to denounce violence and embrace peace ahead of the August General Election.

The Deputy President assured Nairobi residents that under his administration there will be no demolitions without compensation.

"Before anyone is moved, there must be a place for resettlement," said Dr Ruto.

He also pledged to address the perennial water shortages and sewage system in some parts of Nairobi.

Raila accused Ruto of failing to deliver promises he made to Kenyans.
News
5 months ago

Ruto scoffs at Raila's threat to jail him in Kamiti