•On Thursday, the union officials signed a deal that Kiama will not be fined or jailed by Judge Maureen Onyango of the Labour Relations Court. 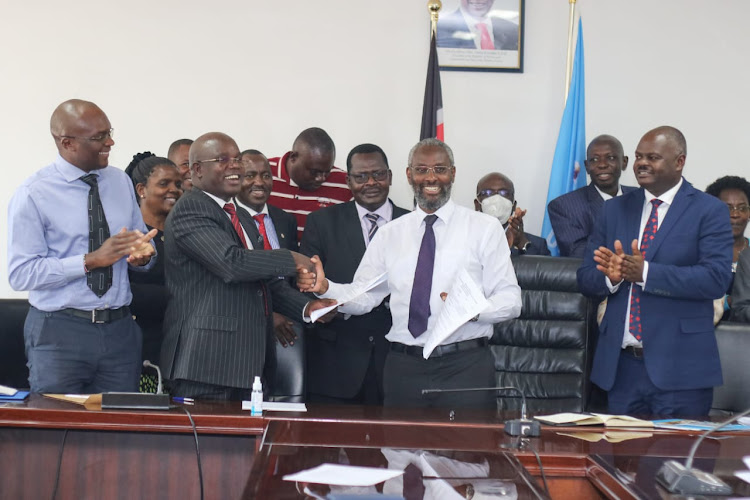 University of Nairobi vice chancellor Stephen Kiama was reprieved after a group of lecturers who had cited him for contempt of court withdrew the case.

The lecturers, mainly union officials, had told the court that Kiama had refused to withdraw a set of radical changes he had proposed at the university even after a court ordered that the changes be halted.

The university boss was to appear in court on January 27 so he could be jailed for six months or fined for ignoring a court order.

However, on Thursday, the union officials signed a deal that Kiama will not be fined or jailed by Judge Maureen Onyango of the Labour Relations Court.

The court case meant to stop the radical changes will be withdrawn.

Speaking during the signing of the pact, Universities Academic Staff Union secretary general Constantine Wasonga said it’s a new dawn for the institution.

Wasonga said they had established the changes will not affect their members negatively.

“Now that we have been involved and we have been given a roadmap of restructuring, what else do we need the court to do for us?” Wasonga asked.

“We have agreed, the court cannot restructure UoN, it is the parties concerned to sit down and come up with a restructuring roadmap.”

The chapter leadership declared that they have been fully involved in the restructuring.

“Therefore, we tell the court that, whatever was making us differ, will be resolved internally,” he said.

Kiama said the move will set a good example for other colleges.

“As UoN we always set precedence, when we are broke you hear that all universities are broke so I hope others will emulate this,” Kiama said.

The UoN boss called on the government to treat varsities like parastatals.

“Just like the government pays salaries for teachers in primary and secondary schools then it should be the same for universities,” he said.

Kiama had gone to the Court of Appeal to stop his possible jailing after he and four other senior college chiefs were found in contempt by the High Court.

They were accused of disregarding an order stopping the restructuring of the institution.

Kiama together with Winfred Kamau, Bernard Mwangi, Leonidah Kerubo and Mohamud Jama were found in contempt of court in a ruling on December 10.

Uasu challenged the changes arguing that there was no policy framework nor transitional guidelines.

The lecturers said the move had caused anxiety, disquiet, and confusion in the university.

The changes included major reorganisation of the administrative structure and cutting down the number of administrative units referred to as colleges from 35 to 11. 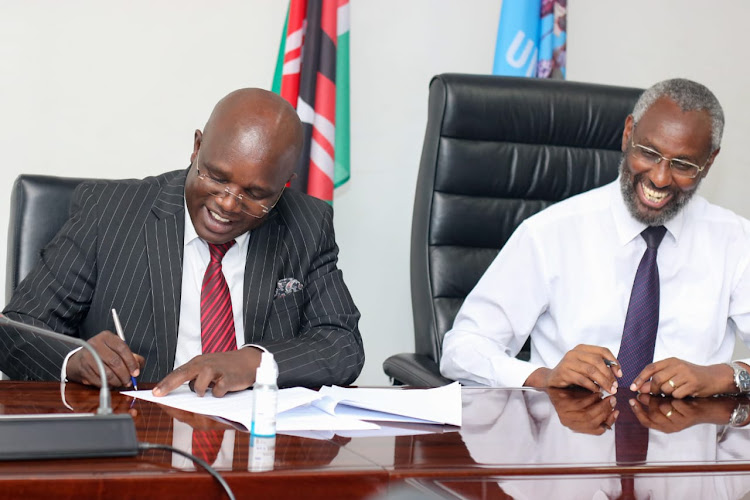 Uasu secretary general Constantine Wasonga, UoN VC Stephen Kiama during the signing of an agreement between Uasu and UoN management on the withdrawal the court case to stop restructuring of the University at UoN Towers on Thursday.
Image: WILFRED NYANGARESI
by LAURA SHATUMA
News
13 January 2022 - 23:00