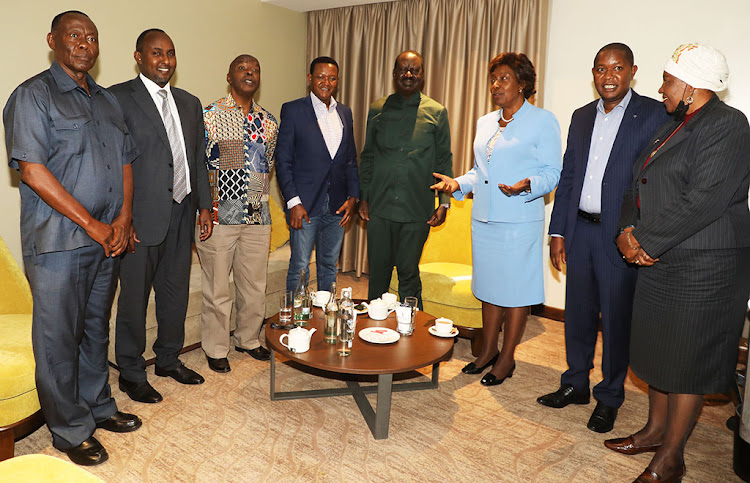 People close to the former vice president have told the Star that they will use the Saturday meeting to be held at Kalonzo's Yatta home to  push for a reunion between Raila and Kalonzo.

"I think we are wasting time with Oka. The longer we take to cut deal with Raila the more difficult things will become for us," a close confidant said.

Kalonzo has convened a meeting of Ukambani leaders to decide which political direction he should take as the clock ticks towards the August 9 election.

“Our meeting will be used to discuss the way forward for the community in regards to the political direction we shall take as we approach the national election,” a group of Ukambani leaders led by Makueni Senator Mutula Kilonzo Jr announced on Wednesday.

Kalonzo's people have quietly asked Raila's side to make the position of Deputy President available for negotiations.

They also want a "significant" share of the government, which includes Cabinet Secretaries, ambassadors and parastatal appointments.

The push for Azimio has emerged due to mistrust among Oka principals.

While Kalonzo's people believe ANC leader Musalia Mudavadi is planning to bolt out of Oka during his party's National Delegates Conference on January 23, Mudavadi's people believe Kalonzo already has a deal to support Raila.

Last Sunday, Oka principals were due to attend a church service in Ziwani in Nairobi but Mudavadi instead went to the Redeemed Church accompanied by William Kabogo.

"We had agreed to go to Burma market for lunch after the church service in Ziwani. But Mudavadi's people told us Raila was going there, only for us to end up in the stadium to watch AFC leopards," an MP close to Kalonzo said.

"We believe Mudavadi is preparing to abandon Oka and is looking for a running mate from Central Kenya," the MP added.

The Saturday meeting at Kalonzo's Yatta home comes amid an onslaught on the former vice president by the three Ukambani governors and uncertainty on the future of the One Kenya Alliance.

On Wednesday, Mutula insisted that Kalonzo was in Oka to stay.

“Our party leader is determined. We are fighting within Oka, and our aim is to fly the presidential flag. Joining Raila is not an option now. Unless he joins us (Oka), but the opposite will not be easy,” Mutula said.

Ukambani, which has been under Kalonzo’s control for decades, has lately become a battleground, with the three governors and Deputy President William Ruto fighting to wrest the region from him.

Raila, through the governors, and Ruto are apparently exploiting the confusion and lack of clear direction, to take the region away from him.

The county chiefs, all leading separate parties, have launched aggressive campaigns to snatch the region away from the Wiper chief.

With the possibility of losing grip on his political turf becoming a reality and the election seven months away, Kalonzo has moved to stamp authority with the mega meeting at his home.

Elected and nominated political leaders, the clergy, former elected leaders, aspirants, leaders, professionals, youth leaders and persons with disability from the region have been invited to the meeting.

According to the 2017 data by the IEBC, there are 1.51 million registered voters in Machakos, Makueni and Kitui counties, a crucial vote bloc for a presidential candidate.

On Wednesday, the governors held a meeting at the People's Park in Machakos and trashed the planned meeting as a New Year party.

The three argued that there was no way a political leaders' meeting could be held at someone’s home.

“The development interests of the community must come first before the personal interests of any leader. The people want development that rolls back poverty and not merely big positions,” Mutua, who read the governor’s resolution, said.

“A leader who has failed to achieve development can’t negotiate for us to get development. We need to ask ourselves, who is that leader who will lead the economic revolution of Ukambani? We want to be respected,” he added.

In a clear indication that they are spoiling to neutralise Kalonzo’s influence in Ukambani, Mutua said the community has tasked them to offer political direction ahead of the general election.

The brazen attack and daring remarks pile more pressure on the former vice president who is struggling with tough options on his political future.

Oka, which brings together Kalonzo, Mudavadi, Moses Wetang'ula (Ford Kenya) and Gideon Moi (Kanu), is yet to pick a flag-bearer or hit the campaign trail with only seven months to the polls.

Working with Raila implies that he will sacrifice his presidential bid for the ODM chief who is apparently President Uhuru Kenyatta’s preferred successor.

Last year, a section of his allies led by Kitui Senator Enoch Wambua threaten to abandon him if he drops his bid for Raila.

Should he opt to remain in Oka, chances of them winning the presidential seat will be slim as the latest opinion poll indicates they only control about one per cent of the voters.