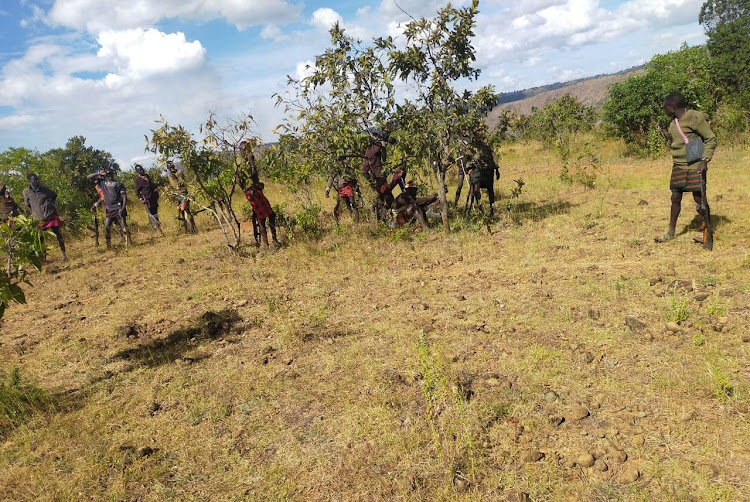 A group of bandits armed with guns spotted relaxing in the bush at Lowoiwe, Baringo South on December 27.
Image: Courtesy 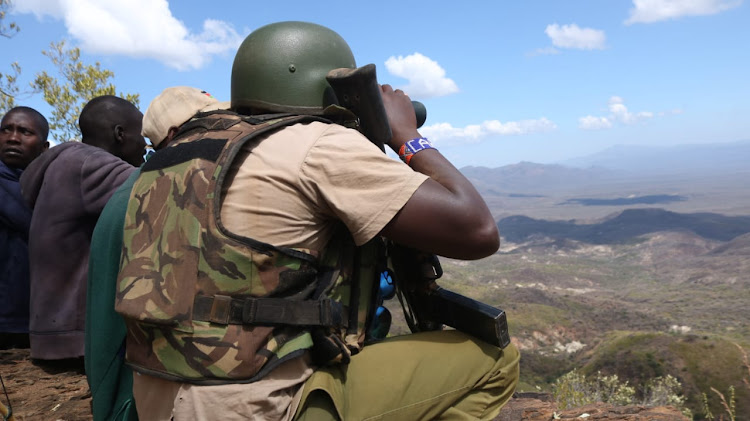 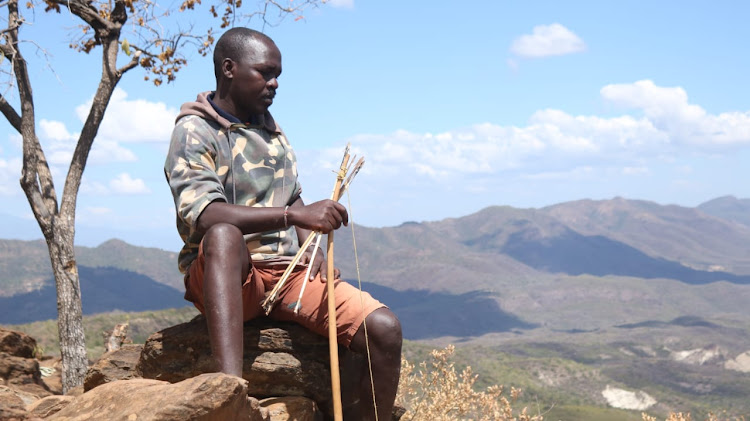 A visibly stressed man armed with a bow and arrows ponder the next move at the volatile Kisumet area in Bartabwa, Baringo North on January 7.
Image: JOSEPH KANGOGO

Armed bandits on Tuesday raided a village in Baringo North and made away with 242 goats.

Yatia location chief Jackson Keitany said the bandits attacked as residents met to make burial arrangements for Vincent Tuwit, 24 and 65-year-old Kipkenei Kimurio who were killed in another attack in Yatia and Kisumet villages last week.

“The grieving families had met at around 7pm to organise the burial of their loved ones, shortly after the bandits stormed in and shot in the air to disperse the mourners,” Keitany said on Wednesday.

He said the heavily armed bandits overpowered the Rapid Deployment Unit officers in Kagir before taking off with the 242 goats.

He said the animals belonging to Reuben Kangogo (130), Rael Chebon (62) and Wilson Chepkeres (50), were  driven towards Tiaty West.

In last week's incident, the bandits killed Tuwit and drove away with his 48 head of cattle towards Tiaty while mzee Kimurio was killed while cooking his evening meal.

David Lomul, a resident in Kisumet said the rising cases of insecurity are worrying, adding that the criminals are not even sparing those mourning.

"They want to destabilise and cause more trauma and confusion,” he said.

On Wednesday, Baringo North OCPD Fredrick Odinga said he was heading to the area to ascertain the banditry attacks.

“I will bring back full information once I am back but I urge residents to remain calm as we try put measures to contain the situation,” he said.

Residents said they did not have a  peaceful Christmas as the bandits raided and frequently threatened their peace with gunshots.

“The criminals suspected to come from the neighbouring Tiaty subcounty seem to be so keen on expansion of territories more than livestock theft because most times they kill and scare away people without stealing any animal,” Chemoe resident Richard Chepchomei said.

Last year alone, more than 80 people were killed, others displaced and thousands of animals stolen by bandits in West Pokot, Elgeyo-Marakwet and Baringo counties.

It is believed more than 6,000 illegal guns still lie in the hands of civilians in North Rift while the government withdrew the National Police Reservists.

Elected leaders from Baringo have also been accused of keeping mum leaving their people to suffer from bandits attacks.

Residents have since requested Interior Cabinet Secretary Dr Fred Matiang'i to tour the area and address the matter in vain.

So far, hundreds of residents have fled their homes to put up with relatives in safer places like Sibilo, Buruyo, Bartabwa and Rimo villages.

Baringo North MP William Cheptumo called on the government to consider recalling the NPR and compensate the attack victims.

“The government should stop watching helplessly as our people are being massacred and rendered homeless,” Cheptumo said.

He questioned whether the residents will vote peacefully if the banditry attacks persists until August.