I am not in the race to seek employment, says Raila 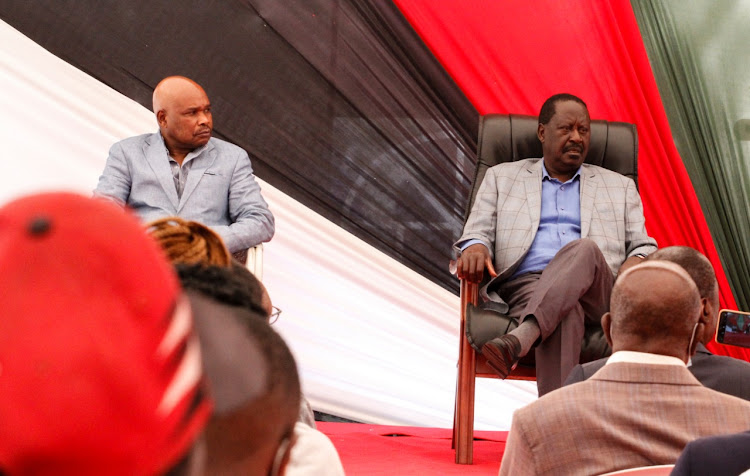 ODM leader Raila Odinga on Tuesday said he is not in the presidential race to seek employment but to turnaround the country’s economy.

The former Prime Minister described the August 9 polls as a moment of economic revolution that should be driven by the youths from across the country.

Raila said his role as the president will only be that of the driver of what he called the third and final revolution.

“I am not seeking employment as the president of Kenya. I want to partner with you so that we can bring change to our country,” Raila said.

The former prime minister pledged to make an equal Kenya where everyone has access to education, employment and healthcare.

Speaking when he met a delegation of youths from Kiambu county, Raila promised to create a conducive environment for job creation to thousands who are unemployed, despite possessing requisite training.

He said manufacturing will be key in his administration where each subcounty will be encouraged to identify with one product and in the process create employment to the youths.

"We will bring industries through value addition to grow agriculture sectors that will create employment to our youth," he said.

"We must partner together. I want to partner with you so that we bring change to our country and we will be able to expand our economy."

"Each and every child in our country, irrespective of their socio-economic status of the parent, will get an equal opportunity at the primary, secondary [level] up to university," Raila added.

"We must create a conducive environment for our students to learn, this is the future of our nation."

Raila also said he will rollout his Sh6,000 monthly social protection programme to cushion poor households with no member in formal employment.

He said the promise is not a campaign gimmick as is being claimed by critics, but a well-thought-out social protection plan that has worked in other countries.

“To the naysayers, this is not a campaign gimmick. This is a promise I will fulfil, if elected. No Kenyan should sleep without food. I know how to get the cash, I will seal all the loopholes,” he said.

Makau vouched for Raila as the best candidate to succeed President Uhuru Kenyatta given his plan for the country and known democratic credentials.

“Our campaign promises a society that will be inclusive. A society in which you will be valued as human being, that is the campaign Baba is running,” Makau said.

Sifuna urged the youths to not shy away from registering as voters, saying that is the only way to put right leaders in office.

“Even if you are not interested in politics, politics is interested in you. Decisions made by leaders affect you directly. There is relationship how jobs are created and the leadership of a country,” Sifuna said.

Wanjala called on government to take action against hate mongers, including banning perpetrators from the August polls.

Raila maintained every poor household will get Sh6,000 every month from the government.
News
6 days ago

Raila to hold mega rally in Thika on Saturday

Raila has not had a political rally this year.
News
5 days ago
by LUKE AWICH Political Reporter
News
12 January 2022 - 06:05