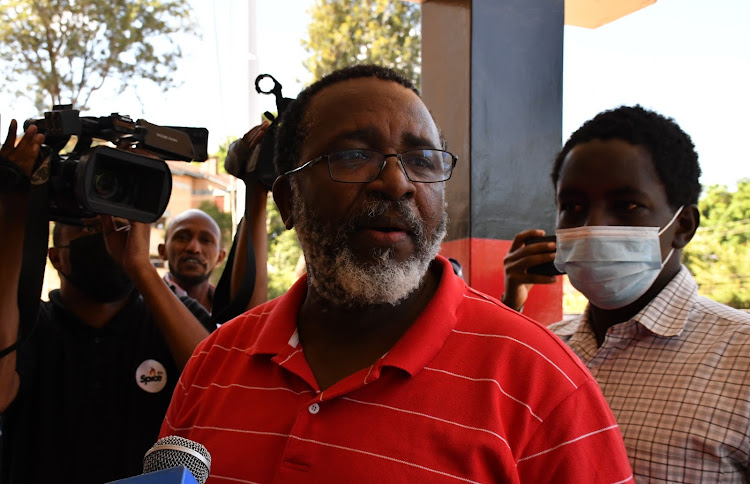 ODM leader Raila Odinga on Sunday hit back at Deputy President William Ruto's Tangatanga brigade daring them to mete attacks on their critics in the perceived UDA bases.

The ODM leader condemned the utterances by Meru Senator Mithika Linturi and those by his colleagues in the Ruto-led UDA party saying reckless and incendiary remarks will not be tolerated.

Raila, during a meeting with mothers of ex-Nyayo detainees in Kiambu, dismissed the defence mounted by Tangatanga that the Linturi sentiments were taken out of context.

"We know the language of incitement when we hear it. We heard what they said in Eldoret. My message to them is, try and see."

"There is no joke about this. Every Kenyan will be safe during the election. Every Kenyan has a right to live wherever they want…not because of sympathy or approval of anyone," the former PM added.

"Every Kenyan will be protected by the government. You can’t keep warning people. We will protect all Kenyans. There is no compromise," Raila said.

Linturi was arrested in Eldoret on Sunday and transferred to the Directorate of Criminal Investigations headquarters after the "madoadoa" remark.

The lawmaker is also expected to appear before the National Cohesion and Integration Commission on Wednesday over the utterances.

Ruto’s Tangatanga team has come under fire over the deemed reckless statement by the Meru Senator during a UDA rally in Eldoret.

Leaders from all walks of life, including some UDA backers, joined Raila in condemning the utterances.

They held the general view that such talk could spark poll chaos as was experienced during the 2007 general election.

Over 1,300 died and over 600,000 were displaced internally by the events. Eldoret was one of the worst-hit areas during the fracas.

Those who spoke demanded that the investigations should not only focus on the utterances but also on the perceived sponsors.

“It is such statements that led to the unfortunate massacre of people in the Kiambaa church on January 1, 2008, not very far from where Senator Linturi was speaking. To claim ignorance of such important matters cannot be allowed as a refuge,” ex-Gatanga MP Peter Kenneth said.

“No Kenyan of goodwill, from any walk of life, would want to revisit such a dark past in our country’s history. No doubt, such remarks greatly impact Kenyans, especially those who still live with the scars of losing loved ones in the violence occasioned by such remarks,” he added.

Kenneth said, “It is not enough to say that leaders must refrain from such utterances; they must also be held to account for their words.”

Laikipia Governor Ndiritu Muriithi, who is also Raila Odinga’s campaign committee chair, said the sentiments were dangerous and could lead to violence if not tamed.

“We have to shun politicians who incite people to cause violence and do not respect the rule of law and independent institutions,” the county chief said.

Lawyer Ahmednasir Abdullahi and David Ndii are among UDA sympathisers who castigated the sentiments even as a number of party insiders defended Linturi.

“Kalejins in the Rift Valley like all Kenyans have a constitutional right to vote for a presidential candidate of their choice other than DP Ruto. It is on that note that we must all condemn the madoadoa comment by Senator Linturi. Let the people decide,” he said in a tweet.

For his part, Ndii said, “Kenyan politicians suffer from microphone disease. Microphone + (plus) crowd and they take leave of their senses.”

“Both Linturi and Gachagua’s comments in Eldoret are sickening. MCs should be tasked to remind every politician of microphone disease before they take the podium,” the Economist said.

"The peace of our country is vital and no politician should be allowed to sow seeds of discord among Kenyans. Every Kenyan has a constitutional right to live and work in any part of the country,” he said.

“Let the security agencies focus more on guaranteeing security to Kenyans than putting their fingers too deep in the succession politics of this country,” Musalia added.

Even so, governors called for thorough investigations and prosecution of the senator as a lesson to other politicians.

Kinyanjui said the utterances attributed to the senator are “a serious assault to the peace and harmony to communities in Rift Valley.”

“To profile persons on the basis of political or ethnic orientation is regrettable,” the county boss said. “We may have our political differences but peaceful coexistence is a common asset for all irrespective of political orientation.”

“The right to live, work or invest in any part of the country is not a favour from politicians, but a constitutional right,” Kinyanjui added.

He was joined by Nyoro who said the “reckless remarks amount to ethnic profiling and set a dangerous tone in a region that has experienced the ugly side of political intolerance.”

“We still have residents from Kiambu who have lived and worked in Rift Valley, and who are yet to fully heal the scars of political intolerance.”

“We appreciate the directive by the Director of Public Prosecution Noordin Haji to the Inspector General of Police Hillary Mutyambai to probe the senator over his remarks, with the aim of arresting and prosecuting him,” Nyoro said.

Ngilu said, “Forget Linturi, are we going to pretend that we don’t know the owner of the dog? It’s a pattern with the lieutenants of that dog owner.”

“It is the owner of the dog that should send chills down the spines of all Kenyans, not just those that live and work in the Great Rift Valley,” the governor added.

Gatundu South MP Moses Kuria said the DP be called upon to rebuke the sentiments made before him by his lieutenants.

Following his arrest, Linturi said he would cooperate with the authorities and comply with the law on his invitation to the NCIC.

The senator apologised for the remarks saying he was misquoted and misunderstood.

“Anyone that really understands should know that this was a UDA rally and what I meant was that those people who are not followers of UDA should be rejected by the Uasin Gishu voters,” he explained.

“I am not a warlord. I am not a warmonger. I am a peace-loving Kenyan. I have no record of preaching violence,” Linturi added.

UDA backers said the arrest and detention was part of the harassment and intimidation the Ruto side has suffered at the hands of the Jubilee government.

“The utterances of the senator are on record. He just said people should get rid of leaders who are opposed to UDA and asked the voters to clean the area politically,” Gachagua said.