Ruto said blackmail, intimidation and arrests would end this year after elections.

• Ruto also defended himself against attacks by Raila that he was dishing out more money yet he earns very little.

• The DP said he had not appointment anyone to audit his wealth and those doing it are fake. 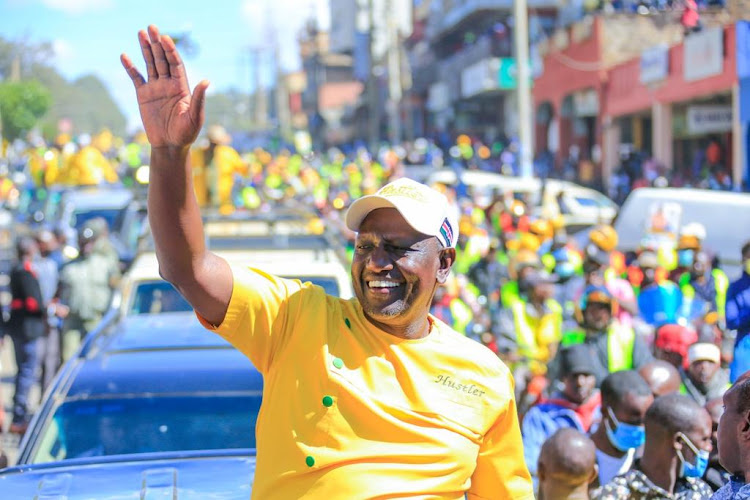 DP William Ruto has hit out at ODM leader Raila Odinga for amassing a lot of wealth and stashing part of it abroad, instead of using it to help poor Kenyans.

Ruto claimed that Raila owns alcohol manufacturing factories and is engaged in gas production but he invested the proceeds in the US and South Africa among other regions.

"He should use that to help poor Kenyans instead of taking it out of the country to benefit himself,” he said.

The Deputy President said the former Prime Minister was being forced on Kenyans so that he can be used to change the constitution and create an imperial presidency.

He said Kenyans will not accept such a leader and that his competitors should not think the county belongs to them.

Ruto also defended himself against attacks by Raila that he was dishing out more money yet he earns very little.

He said those complaining about the money he gives during rallies are rich and should not complain about the Sh2 million he gives out to groups.

The DP said he had not appointment anyone to audit his wealth and those doing it are fake.

"That is little money I give out. I have given out support to more than 300 groups countrywide," he said.

"This year we will defeat these people who think they will choose for us a leader.”

Ruto said blackmail, intimidation and arrests would end this year after elections.

He insisted that said the country does not need changes to the constitution, which the BBI was meant to do by creating an imperial president.

Ruto added that the plan to change the constitution was not aimed at empowering Kenyans or strengthening devolution but was meant to create an imperial all powerful president. 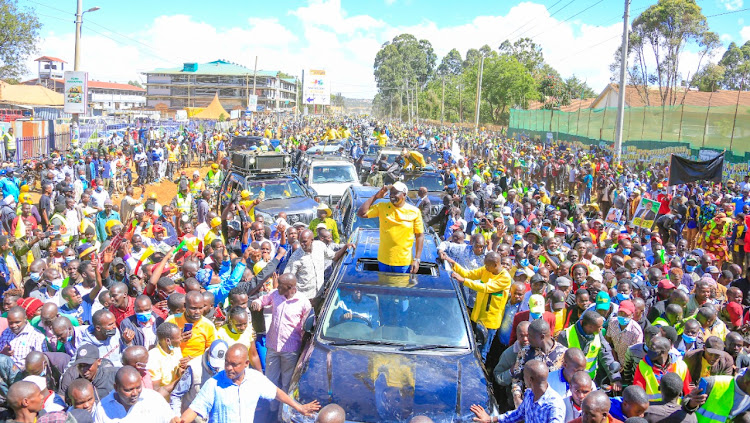 Ruto said the Big Four Agenda would have provided jobs for youth and universal healthcare but it didn't work because of sabotage from those who interfered with Jubilee.

"They came and told us to abandon that and see how we can change the constitution so that we create positions," he said.

"We were sabotaged by those who don't want good for our country but We now have the bottom up economic model that will take Kenya to the next level."

He promised that he would ensure that all they had promised with President Uhuru Kenyatta would be completed if elected president in August.

He said the Hustler movement was against unemployment and poverty and would ensure every Kenyan counts.

Ruto said leaders from all parts of the country had come together to unite the country and tackle it's challenges, assuring allies who had suffered intimidation because of him that it was only seven months left and the country would be liberated.

Garissa Township MP Aden Duale said this year was important for Kenya and the politics of DP Ruto adding that they support him because he has a known track record since the time he served as minister and now a DP.

"We are presenting a candidate that has a record, he is tested, has a national party and we know will transform the country,” Duale said.

He accused Uhuru of allowing crooks and criminals to destroy Jubilee and he should be wary not to leave a legacy of dividing the country into tribal parties.

The former National Assembly Majority leader said Ruto and UDA represent an economic revolution and not those few rich individuals who want to control the economy since independence.

Duale also cautioned Raila to be careful not to be a victim of the politics of deceit by those around him.

"It is those rich people who have cheated you that Kenyan youth need Sh6,000. We will give the youth jobs," he said.

Duale added that Uhuru has no role in deciding who he will hand over power to after the elections.

"Mr President you have no choice but to abide by the constitution and hand over power to whoever will be elected by Kenyans."