Stage set for roll out of CBC to Grade 6 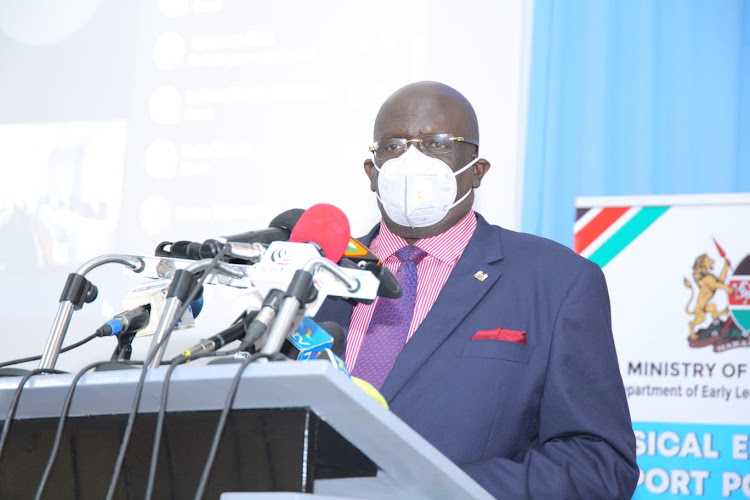 Education Cabinet Secretary Prof George Magoha during the launch of the Physical Education and Sport Policy at KICD.
Image: Ministry of Education

The government has started preparations to roll out the 2-6-6-3 curriculum to Grade 6 after publishers were asked to submit learning materials for evaluation.

The Kenya Institute of Curriculum Development will evaluate and approve materials to be used for teaching and learning in schools.

The CBC moves to Grade 6 next year which also marks the end of primary school under the new system.

This meaning pioneer cohorts will exit primary school and join junior secondary school under the new system in 2023.

KICD chief executive Charles Ong'ondo said on Friday that the institute has asked publishers to submit course materials for the Grade 5 rollout for vetting which starts on April 6.

"The Kenya Institute of Curriculum Development wishes to invite publishers registered or legally represented in Kenya to download the submission, evaluation and approval procedures for competency-based curriculum course materials 2020," he said.

Ong'ondo further disputed the claim that the pioneer class is under a rush occasioned by the crash programme adopted last year to recover time lost during the pandemic when schools were closed for nine months.

CBC has 14 subjects in primary school and the evaluation will entail a review of textbooks to be used.

"Publishers submission for any of the listed learning areas for evaluation and approval must be made not later than April 6."

Last week, Education Cabinet Secretary George Magoha said plans were underway to train teachers on the new curriculum in the course of the year.

He said as part of CBC rollout plan, the government will construct additional classrooms in all institutions under the schools infrastructural development programme.

Magoha disclosed that out of the Sh4.2 billion earmarked for establishment of infrastructure in the basic learning institutions in this financial year’s budget, Sh1.9 billion would be used to procure additional desks with Sh1 billion being allocated to secondary and the other remaining Sh900 million to primary schools.

“It is possible that we are going to construct more classrooms in our schools,” he said.

At the same time, the CS  said the government has placed every school on geographical Information System purposely to ascertain the existing infrastructural gaps in institutions that need to be fixed ahead of the curriculum rollout.

He expressed confidence over the success in the implementation of the new curriculum to the next level.

The training is expected to take place during the school holidays of April, August and December.

However, the Teachers Service Commission that handles the training, raised concerns saying it was too underfunded for the exercise.

Last year, TSC chief executive Nancy Macharia said the commission only received Sh300 million out of the required Sh1.3 billion for the training.

Macharia spoke when she appeared before the National Assembly's Committee on Education on Wednesday last week.

Why 2022 could be litmus test to country’s education future

The year will have four terms, two KCPE exams, two KCSE exams, and an assessment for the pioneer CBC class
News
5 months ago

TSC directs teachers to up their games to meet CBC requirements

By April 2022, she said the commission will be training secondary teachers on CBC
Counties
6 months ago

Garissa to get 42 classrooms at Sh33 million

Phase I of the project will see 26 classrooms constructed at a cost of Sh20 million.
Counties
6 months ago

Says this to ensure fair play among learners from both ‘poor and rich’ families.
News
6 months ago
by LEWIS NYAUNDI Education Reporter
News
07 January 2022 - 22:00