The ANC boss had suffered the brunt of massive defections to Azimio.

• Musalia suffered a major blow as at least nine MCAs also dumped him. 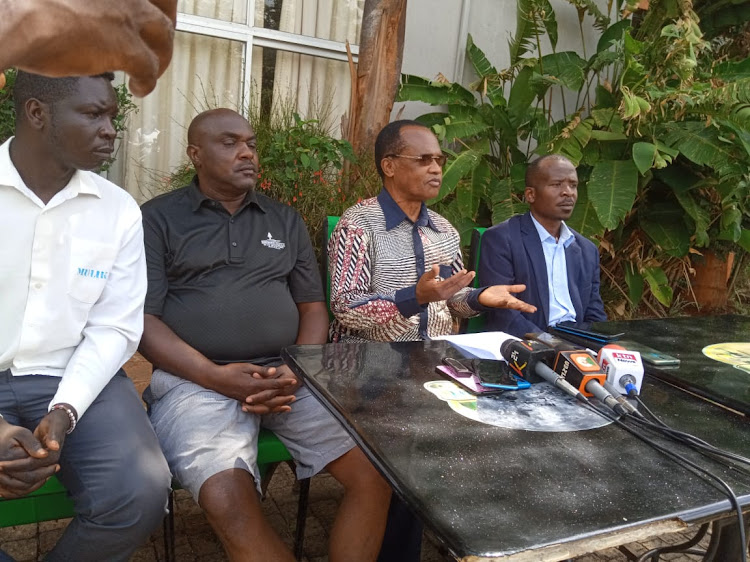 The Amani National Congress (ANC) party was Saturday fighting the damage inflicted by the rival Azimio movement during its Kakamega rally on Friday.

The Musalia Mudavadi led party was trying to control damage by downplaying the defection of its MPs and MCAs and the impact of the Western Azimio dubbed Bukhungu II on its support base.

ANC, a member of the One Kenya Alliance (Oka) took the brunt of the Raila Odinga led Azimio raid in Western after its deputy party leader and Lugari MP Ayub Savula, his Teso North MP Oku Kaunya and several MCAs defected and declared support for the firmer prime minister’s bid.

The move dealt a major blow to the fledgling alliance that is yet to name its presidential candidate and bolstered the narrative that 2022 was a two-horse race.

On Saturday, Kakamega ANC branch secretary Prof Amukowa Anangwe addressed the media in Kakamega and said the defections from the ANC was not a big loss as the party has a huge reservoir of followers and potential candidates ready and willing to replace and soldier on unperturbed.

“This should be seen and analysed within the national context. Most national parties are in a state of flux and witnessing a season of defections by politicians seeking a vantage point to secure political seats in the forthcoming elections,” he said.

He said defection were not a phenomenon that is just unique to ANC, adding that Jubilee suffered the severest hemorrhage when its parliamentary majority declined drastically due to defections.

“ODM has also suffered the same fate when some of its stalwarts like Turkana governor Josephat Nanok, hid Kilifi counterpart Amason Kingi, and Aisha Jumwa quit in order seek reelection in alternative parties. In other words, the exit of Savula and Kaunya during the ODM rally, is no big deal. ANC has taken in stride the happening and wishes them well in their new parties,” he said.

Anangwe who is also the Mudavadi presidential chief campaign manager dismissed null and void the resolutions read out by a group of elders endorsing Raila as the regions preferred presidential candidate.

“The resolutions are not only wishful-thinking, undemocratic, illusion and misguided and outrageous but also sought to usurp the legitimate and democratic right of the electorate to freely choose whoever they prefer for the various seats in 2022,” he said.

He said that the elders should also know that they lack the capacity and the wherewithal, let alone the political will, to enforce such monumental decisions.

He said that instead Cotu boss Francis Atwoli and Kakamega governor Wycliffe Oparanya to demonstrate individual courage and political prowess by competing for the ODM presidential ticket, rather than to kowtow and hero-worship Raila and exhibit such political cowardice like they are lesser men.

He said that the elders who purported to give the Luhyas community political direction as purported since they don’t have the mandate to made such decisions and were bound to fail.

He said such decisions are to be made by the Western Elders Council chaired by former minister Philip Masinde.

Anangwe said that the soccer tournament organised by Kakamega senator Cleophas Malala in Mumias and which was attended by DP William Ruto had nothing do with Mudavadi.

He asked ODM to demonstrate political maturity displayed by the Luhya community during the Bukhungu stadium by allowing a peaceful event and accommodate other presidential candidates in his back yard instead of throwing stones in the pretext of defending babas bed room.

“As ANC, we pledge to carry on our political activities within the confines of the law, the constitutional dispensation and respect for other parties' fundamental democratic right to canvass for support, and we shall expect the same treatment from ODM's stronghold in Nyanza,” he said.

“Prior to the event, a lot was said as to the main purpose of the rally, which caused unnecessary anxiety, misunderstanding and altercations that would have easily precipitated dastard acts of political violence but the community chose to remain peaceful," he said.