Uhuru: 2022 is a new page to write fresh stories

The President said the new year gives all Kenyans to do things better.

•"The new year is one for course correction and building back better," Uhuru said.

•In a pre-recorded video shared on Friday, the President said the new year gives all Kenyans t do things better. 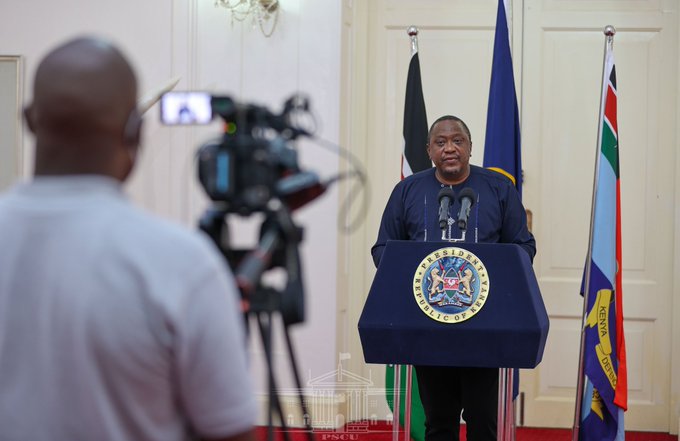 President Uhuru Kenyatta has sent a message of hope to all Kenyans as they usher in the new year.

In a pre-recorded video shared on Friday, the President said the new year gives all Kenyans t do things better.

"The new year is one for course correction and building back better," Uhuru said.

"The future is invisible to the naked eye, and only those with the lens of faith can see it. Only the bold and courageous can achieve it."

Uhuru the new year offers 365 days of an empty page to every Kenyan upon which they will either chronicle their story of success or failure.

While reflecting on the past year, Uhuru acknowledged the National development he spearheaded.

"In the New Year 2022, the nation will move closer to the realizationof the Universal Health Coverage. Through our different programmes,health care will be available to all and affordable for all. This will bemade possible because of the bold and progressive legislation wehave made to support it."

The Head of State said several seminal state projects will be completed in 2022 and the dividends of those public investments will be felt by Kenyans.

"In the early part of 2022 for instance, the CBC InfrastructureProgramme will have delivered 10,000 classrooms across the country;securing our children a better environment for their studies," Uhuru said.

"Our landscape in the New Year will also be redefined by thecompletion of the construction of major road arteries across everypart of the nation."

The iconic Nairobi Expressway will be open for use in the first quarter of the New Year.

"In the New Year the significant progress we have made in Affordable Housing, Food Security and the expansion of domestic Manufacturing will become more visible," Uhuru said.

"Also notable will be ourupgraded defence and internal security capabilities. In fact, we havelaid a superlative foundation for our external and internal defence uponwhich future administrations can build on."

"In 2022 the Nairobi Metropolitan Area will significantly address the water scarcity that has plagued the metropolis through the completion of the Northern Collector Water Supply Project that is expected to double water supply to the region."

He added, "Reforms in the Energy Sector will also continue a pace, with electricity prices expected to be reviewed even further downwards by the end of the first quarter of the year 2022."

To boost tourism, trade, and social engagement; and to bolster continental integration; Uhuru said the national carrier Kenya Airways will join hands with her partners in South Africa to establish a Pan-African Airline with unmatched continental reach and global coverage.

"In the New Year, within the Region, for greater fraternity, security, and shared prosperity; Kenya will join the other members of the East African Community in welcoming the Democratic Republic of Congo to the Community," Uhuru said.