List of presidential aspirants and what they stand for

The big question, however, remains to be who will go all the way to the ballot.

•Some of the aspirants have talked of forming coalitions.

•Many individuals have set their eyes on the presidency 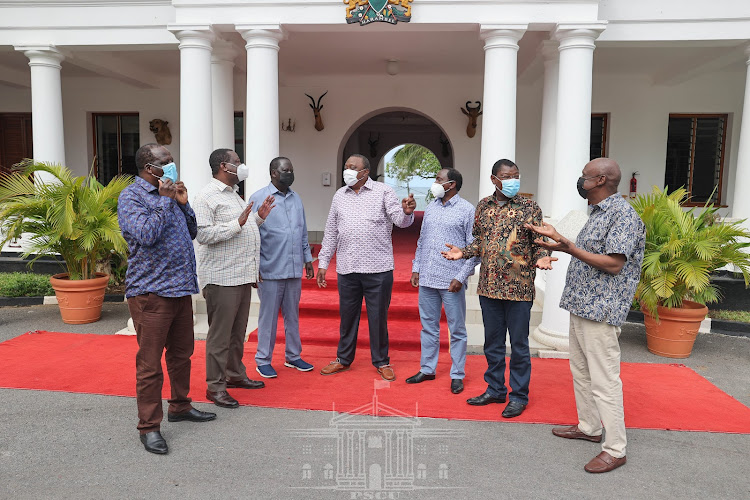 Whenever an election season approaches, many people claim to have their eyes on succeeding the outgoing president, but very few get to feel the heat of the ballot. This has been the case in Kenya every five years and the 2022 General Election does not look any different.

Many individuals have set their eyes on the presidency; many have formed parties they intend to use in next year’s elections. These individuals include governors, former presidential aspirants, speakers and diplomats among others.

Number of Kenyan governors serving their final terms stands at 21.
News
6 months ago

Some of those who have been talking of coalitions include the One Kenya Alliance which comprises of Musalia Mudavadi, Kalonzo Musyoka, Gideon Moi and Moses Wetangula. This is despite Mudavadi and Kalonzo insisting that they must be on the ballot gunning for the country’s top seat.

The three, who have all declared their bid to succeed President Uhuru Kenyatta, are cobbling a coalition that will be known as National Alliance for Change.

ODM leader Raila Odinga has also been calling on other parties to join hands with him under the Azimio la Umoja unity call as he makes his fifth attempt at the presidency.

Below is a list people who have declared their presidential bids and what they stand for;

Deputy President William Ruto is among the top two contenders who seek to succeed President Uhuru Kenyatta once he retires in August next year.

The DP has been going around the country calling on Kenyans to support his bid for the country’s top job under the United Democratic Alliance party. Through the party, Ruto has pledged to use the bottom up economic model to save the country from the struggling economic situation.

He insists the model will help create jobs for the youth and marginalized by giving small interest free loans to young people to start business which will create employment.

The DP has also pledged to continue the Big 4 agenda started by Uhuru and ensure it comes to fruition.

He also promises to focus on the agriculture sector which is the backbone of the country’s economy by providing fertilizer and other farm input at subsidized rates.

Ruto has been traversing the country selling his bottom up model.
News
6 months ago

The ODM leader will be making a fifth stab at the presidency, which is widely seen as his last time contesting for the country’s top seat. He is also among the top two contenders for the seat.

Through the Azimio la Umoja unity calls, Raila insists that it is time Kenya goes for her third liberation which is an economic revolution that will make Kenya emerge as a modern and industrial nation that will "consign poverty, ignorance and disease to the dustbin of forgettable history".

During the Azimio la Umoja convention, the former Prime Minister said his focus would be on a Ten-Point People’s Programmes namely; Inua Jamii, Pesa Mfukoni, BabaCare which will scale up the Universal Health Care, Kazi Kwa Wote, Uchumi Kwa Akina Mama, Hashtag Inawezekana for the youth, Waste not a Single Child for education, Fukuza Njaa, Maji Kwa Kila Boma, One County, One Product and The Principle of Administrative Continuity.

If he goes all the way to the ballot, this will be the second time Mudavadi will be giving a shot at the presidency. This time around, he insists he has to go all the way to the ballot while at the same time being open to the idea of the One Kenya Alliance coalition with Kalonzo, Moi and Wetang'ula and they are still calling on likeminded individuals to team up with them.

Mudavadi rides on the idea of making the economy better and improving the lives of Kenyans under the hash tag (#UchumiBraPesaMfukoni).

Wiper party leader Kalonzo Musyoka is part of the One Kenya Alliance and also insists that this time around he is not playing number two, to any presidential aspirant. Kalonzo was Raila Odinga’s running mate in the 2013 and 2017 presidential elections.

The former Vice president has been very vocal in asking Kenyans not to vote for people who are well known for corrupt dealings, saying that they are the reason the Kenyan economy is bleeding.

Kalonzo promises to fix the economy and set up structures that work for the people of Kenya.

He has also vowed bring down the cost of living and unite Kenyans though inclusiveness, if elected president in 2022.

Nasa would have denied Jubilee first round victory had Mudavadi joined Nasa in 2013.
News
6 months ago

National Assembly Speaker Justin Muturi says his eyes are set on the country’s top job and he has a five point plan to fix the country. The plan includes creating jobs for the majority of young people, pursuing national unity, accessible quality healthcare and bringing integrity to governance.

The National Assembly Speaker is also promising to restore order in the civil service so that employees earn justifiably for their effort.

Muturi has also said that he is ready to engage like-minded individuals who are willing to move the country forward.

Businessman Jimi Wanjigi recently joined the race to succeed President Uhuru Kenyatta and is seeking to do it on an Orange Democratic Movement (ODM) party ticket. He has been going around the country in a bid to popularise his candidature and support from ODM delegates when time for nominations come.

Wanjigi banks on an economic revolution in addition to improving healthcare standards in the country, including mandatory access to emergency treatment.

Housing, food, water, security, education and social security are the other things he has pledged to improve if elected president.

The businessman is expected to face off with ODM leader Raila Odinga for the ODM party ticket.

Machakos Governor Alfred Mutua has also maintained his stance that he will be on the ballot in 2022 as he seeks to be the next president. This comes despite showing support for ODM leader Raila Odinga’s Azimio la Umoja calls.

While launching his manifesto, Mutua promised to lower the cost of food, internet, phone call charges and electricity which will be top on his priority list.

The governor said his government will be driven by 13-point pillars which include; quality of life, youth agenda, manufacturing, free healthcare for all, security, integrity and accountability, education, infrastructure, social welfare, sports and tourism, ease of doing business, foreign affairs, and environment.

He also promised to create five million new jobs in the first three years of his presidency, as well as giving tax breaks to companies.

Current Makueni Governor Kivutha Kibwana recently called on Kenyans to campaign for him by word of mouth saying that he believes he can redeem Kenya from many of the challenges the country is facing.

Makueni county has made remarkable strides in local manufacturing and Universal Health Care.

Despite asking for Kenyans to campaign for him, Kibwana, unlike other aspirants has not been moving around the country to popularise his bid and is yet to launch his campaigns.

The former United Nations Conference on Trade and Development secretary general recently returned to the country after stepping down from the UN agency and his first order of business was a meeting with journalists, announcing that he had returned to liberate Kenya.

Kituyi is yet to announce the political vehicle he will use to seek the country’s top seat. He says he is still consulting.

Top among his agenda for Kenya is fighting corruption, which is the root cause of all the economic challenges Kenya is currently facing. Youth unemployment is another thing he seeks to address, as well as the issues of Healthcare in country.

As early as January 2020, the governor had already declared that he would seek the country’s top job but had not clearly stated on which party. In August 2021, Wa Iria launched the Usawa Kwa Wote party which he seeks to use in vying for the country’s top seat.

He has been going around the Mt Kenya region trying to popularise the party.

The governor is banking on his development record at the county level, and experience as county boss, as what qualifies him to be the next President of Kenya.

He is yet to launch his manifesto.

The deal is aimed at forming a third force against Raila and Ruto.
News
6 months ago
by BRIAN ORUTA Digital Journalist
News
28 December 2021 - 10:00