Says this to ensure fair play among learners from both ‘poor and rich’ families.

• He said this was meant to ensure fair play among learners from both ‘poor and rich’ families.

• This year’s KCPE exams will be written between March 7 and March 10 while KCSE will be conducted from March 11 to April 1. 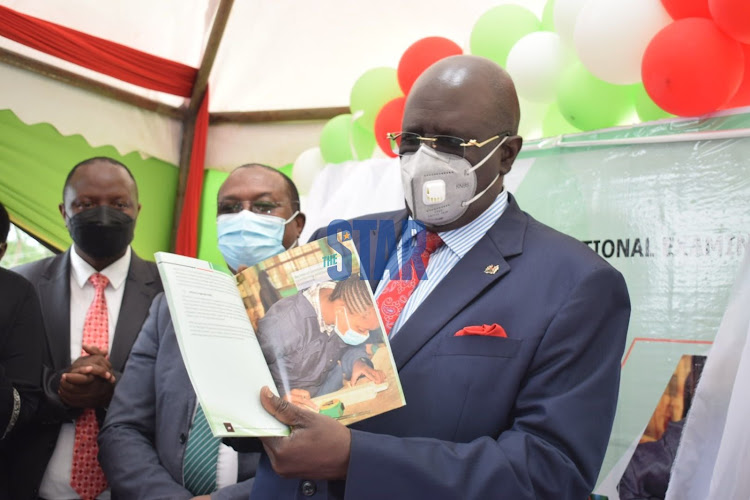 Education Cabinet Secretary George Magoha has said the government will continue paying for the cost of national examination registration under the CBC.

Speaking on Wednesday, Magoha said the registration fee as it has been since 2016 will continue to be borne by the Government.

He said this was meant to ensure fair play among learners from both ‘poor and rich’ families.

“Any child in public or private school is catered for when it comes to paying the exam registration fee, for the rich and poor child alike,” Magoha said.

He was speaking during the launch of the Kenya National Examination Council strategic framework 2022-2027.

In 2016, the Ministry of Education announced a waiver on examination fees for all form four and class eight candidates in public schools expected to sit for their national examinations.

In the following year, KNEC extended the waiver to include those in private schools.

The then Education Cabinet Secretary Fred Matiang’i emphasized that this is in line with the Jubilee government’s commitment to ensure that every candidate sits for their exams.

This year’s KCPE exams will be written between March 7 and March 10 while KCSE will be conducted from March 11 to April 1.

Magoha further noted that the examination safety will be put test next year when five national examinations will be conducted.

This includes KCPE and KCSE for the class of 2021 to be conducted between March and April 2022.

The second set of exams will be conducted in December and will involve KCPE, KCSE class of 2022 and the final assessment for the pioneer class of the new curriculum who will be completing Grade 6.