The medic sees internal body organs clearly, no longer having to make sense from a cacophony of body sounds

•Advancements in technology have compressed the point-of-care ultrasound to such a degree that handheld, pocket-sized versions are now readily available in Kenya.

• Wachira says the Pocus has not replaced the stethoscope, but has become a standard tool that almost every doctor at Aga Khan carries. 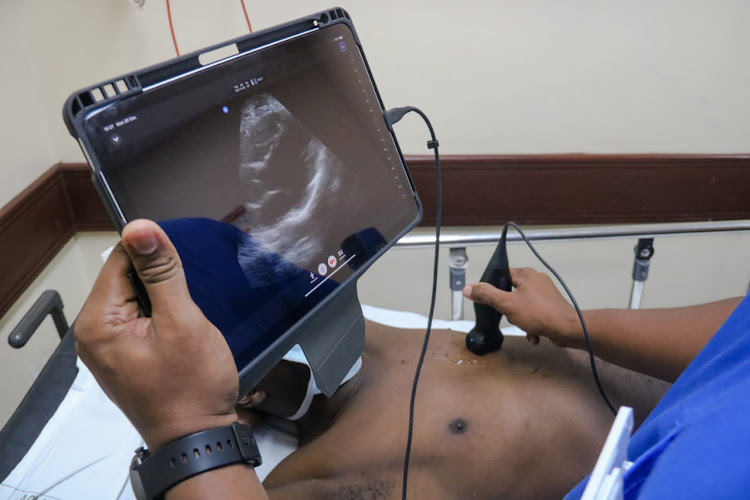 Dr Benjamin Wachira, an emergency care physician at the Aga Khan University Hospital, scans a client's heart at the emergency wing using the point of care ultrasound. The device is now a standard at the hospital, which nearly every doctor carries.
Image: WILFRED NYANGARESI

For many doctors, the good old stethoscope is a symbol of the skill and knowledge they possess.

For more than 100 years, donned confidently over a white coat, it has become so iconic for medics and their work that it is difficult to imagine a future without it.

Yet now, a new diagnostic tool may render the stethoscope obsolete, even in Kenya.

Instead of a stethoscope around his neck, he carries a small handheld device that might, in time, relegate the former into the dustbins of medical history.

The gadget is the point-of-care ultrasound (Pocus) device.

“It has been used by radiologists and obstetricians for a long time,” he explains. But advancements have compressed the technology to such a degree that handheld, pocket-sized versions are now readily available in Kenya.

“Before, I would have used the stethoscope to listen to the patient's body and determine if the sounds are normal or there is a problem,” Dr Wachira explains.

That means he would need to make sense from a cacophony of thumps, crackles, and wheezes from a patient’s body to decide the next course of action.

But at Aga Khan, doctors are now relying more on the Pocus.

It is basically a small probe attached to an Ipad or a mobile phone.

He applies bluish gel on the probe (size of a TV remote) and moves it around the patient’s chest. An image of a healthy heart pumping shows up on the tablet's screen. “Normal,” he says. He moves to the upper right portion of the abdomen. The liver comes up. “Normal,” he says.

“It takes away the guesswork. Before you had to use the stethoscope, listen to the sounds and decide whether to send the patient to the cardiology for a scan or what to do. Sometimes the results would come a week later. But this one helps us make decisions immediately,” he explains.

Wachira says the Pocus has not replaced the stethoscope, but has become a standard tool that almost every doctor at Aga Khan carries.

The device uses sound waves to produce pictures of the inside of the body. It is safe, non-invasive, and does not use radiation.

“Every emergency department in any facility should have this,” Dr Wachira says.

He says it is particularly useful in saving accident victims.

“You can easily pick out internal bleeding in the body within two minutes, or injuries to any vital organ. It basically takes away any guesswork,” he explains.

One study in the United States showed that ultrasound correctly identified particular issues in 82 per cent of patients as opposed to a 47 per cent detection rate with physical examination only.

She was addressing biomedical engineers at the annual gathering, held in Kakamega.

“There is a gap which can be addressed by you, medical engineers, who know the advances in technology. You can challenge us within the policy table to avail such technologies because I am sure there is a whole field that you are aware of technologies that is happening outside there,” she said.

A random check in Nairobi shows the device will cost around Sh500,000. 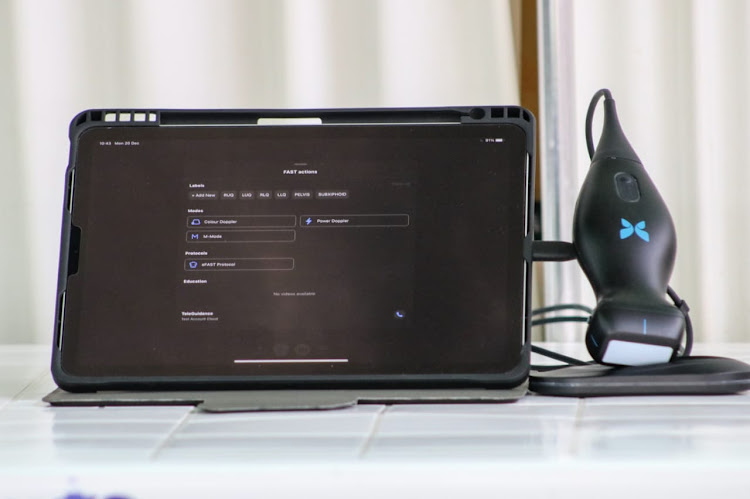 A Butterfly point of care ultrasound device . The device is now a standard at the hospital, which nearly every doctor carries.
Image: WILFRED NYANGARESI
by JOHN MUCHANGI Science Editor
News
20 December 2021 - 23:00