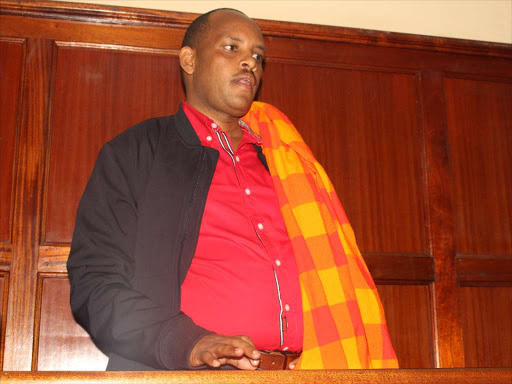 Former Laikipia North MP Mathew Lempurkel got reprieve on Monday after the High Court ordered his release on a Sh100,000 bail.

Lempurkel had been jailed for one year on November 5 after a magistrate court found him guilty of assaulting his political rival, Sarah Korere.

Korere is the current MP for Laikipia North after defeating Lempurkel in the 2017 election.

The magistrate did not give the former lawmaker an option of a fine. Consequently, Lempurkel was jailed at the Kamiti Maximum Prison.

Lempurkel appealed his jailing and sought to be released on bail pending hearing and determination of his appeal.

On Monday, Justice Justus Obwongonga released him on Sh100,000 bail.

When she read out her ruling in November, Okwany said Lempurkel did not produce evidence that he was the one assaulted by the woman, which could have given the court an opportunity to acquit him.

In his defence, the ex-lawmaker had produced a medical report that showed he was admitted to Karen Hospital. The report showed he was suffering from high blood pressure and there was no indication of assault.

Korere produced a medical report and a P3 form that showed she was indeed assaulted.

Witnesses who gave evidence said the former MP assaulted Korere in a boardroom in their presence.

Okwany said the accused deserved the sentence given the rising cases of violence in the country.

“The court has considered that there are many issues of violence in the country and also the fact that the accused is a first offender,” she said.

The magistrate added, “I note from the mitigation record that the accused is a leader who needs to be a good example to others so I proceed to sentence him to serve one year imprisonment.”

Lempurkel on November 21, 2016 at Harambee House in Nairobi willfully and unlawfully assaulted Korere by slapping her on her left cheek.

He was also said to have kicked her on her lower abdomen causing her actual bodily harm.