Wajackoyah: From street child to bagging a dozen university qualifications

Wajackoyah on Friday graduated with a post-graduate diploma in migration studies. 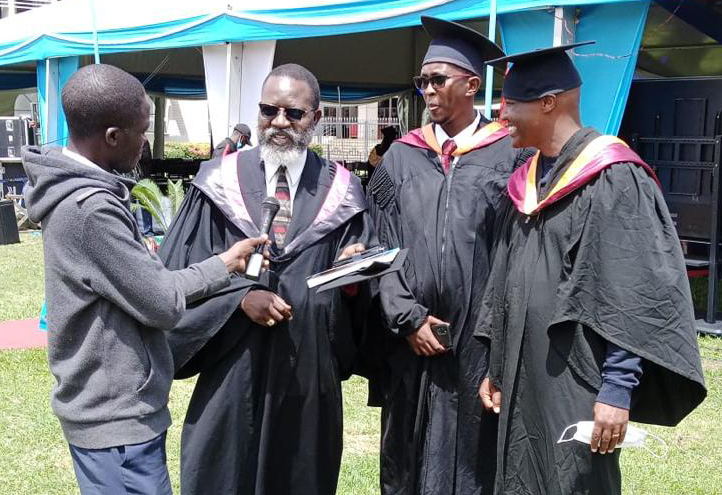 Prof. George Wajackoyah at a press briefing after graduating at the University of Nairobi.
Image: HANDOUT

After bagging over a dozen academic qualifications, that saw him designated a professor, George Wajackoyah, is not done yet after graduated on Friday with a post-graduate diploma in migration studies.

His latest achievement adds to a dozen of his academic qualifications earned from outside the country.

He also indicates that it strengthens his practice as an immigration lawyer.

Wajackoyah, 61, was born in Western.

He was abandoned by his parents after they divorced when he 16 years old.

The law scholar found his way to Nairobi at a tender age and became a street boy and had to learn the art of survival.

He however was rescued from the street life by a well-wisher, who paid for his secondary education and he proceeded to join St Peter's Mumias Boys High School for his A-levels.

According to Wajackoyah, the late politician J.J. Kamotho stepped in and paid his school fees.

Wajakoya said to be privy to information that would violate Obado's right to a fair trial.
News
2 years ago

After completing his studies, he joined the police academy and was absorbed in the Kenya police where he rose to the rank of inspector.

However, he left the service unceremoniously in 1990 and moved to the UK.

He narrates that he was placed in charge of collecting intelligence on the death of late Foreign Affairs Minister Robert Ouko on February 12, 1990.

However, the investigation led to his arrest, detention and torture.

Luckily, he was rescued out and he flew out of the country to the UK, where he began his life in exile.

In the UK, he spent his time studying law and raised his fees through digging graves.

From the UK, Wajackoyah would later move to the US where he has lectured extensively on Law and Economics, Human Rights, Comparative Constitutional and International law all over America.

Wajackoyah is eyeing the presidential seat.

This will not be the first time the professor is eyeing the presidential seat. In 2013, he announced that he would vie for President, but bolted out at the last minute without any explanation.

He is the founding partner of Luchiri & Co. Advocates and is currently a Faculty Member at the Institute of Migration at the University of Nairobi.