The Unit distinctive colour is Grey. The Battalion was also handed the Regimental colours.

• The Consecration and Presentation of the Unit colours to the Battalion mark the Units final milestone in its formation.

• The Unit is based in Nyali Barracks in Mombasa county. 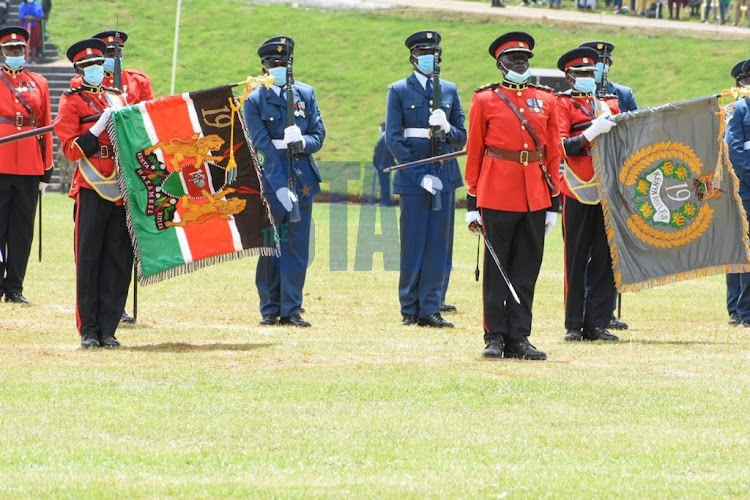 President Uhuru Kenyatta on Sunday handed the presidential colour to the 19th Battalion of the Kenya Rifles.

The Battalion was also handed the Regimental colours.

Presidential and Regimental colours stand for the honour accorded to the Unit, they are to be handled with the utmost respect and saluted as a sign of respect whenever one gets into close proximity to them.

The unit was consecrated by Bishop Salesius Mugambi of Meru Catholic Diocese, who is in charge of disciplined forces and Rev Prof Joseph Galgalo who is Jackson ole Sapit’s deputy at the Anglican Church of Kenya and Khadis Sheikh Mohammed Abdalla Kutwa

The Consecration and Presentation of the Units colours to the Battalion mark the Units final milestone in its formation. 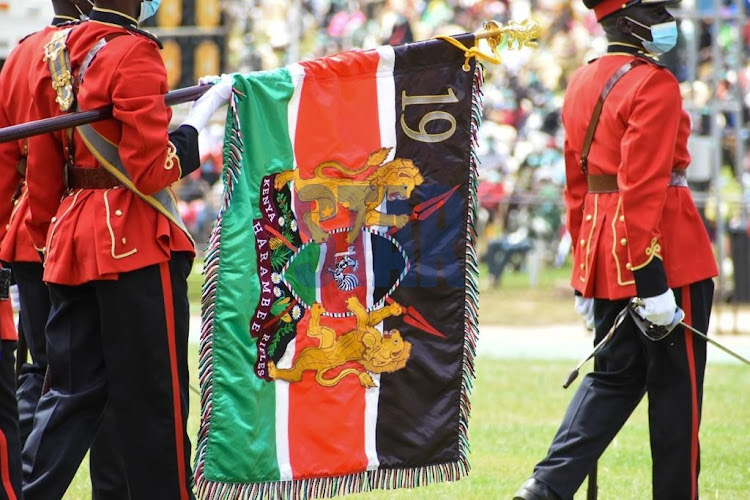 Trooping of the colours is done on two occasions by infantry Units, Air Force bases or Naval bases whereby the first occasion both Presidential and Regimental colours are handed over to a Unit for the first time, it is known as Consecration and Presentation of Colours.

19 Battalion, the Kenya Rifles is an Infantry Unit of the 6th Infantry Brigade.

“We must celebrate our Defence Forces because when they go to war in defence of our borders, they know too well that they will either return hoisting our national flag; or return wrapped in our national flag,” Uhuru said.

In 2018, Uhuru also presided over a similar event but for the 17th Battalion which has since undertaken major operational assignments including at the Kenyan Coast, North Eastern and several tours under the African Union Mission in Somalia (Amisom III, V and VI) in 2014, 2016 and 2017. 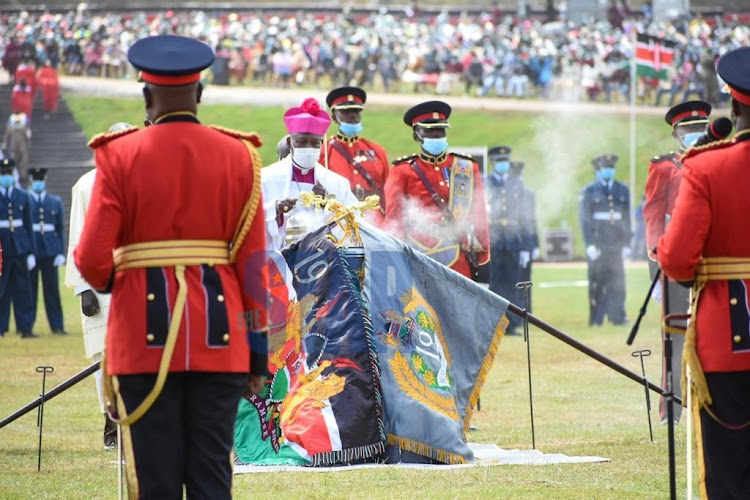 The presidential color of the 19 battalion, Kenya rifle flag during the Jamuhuri day celebration at Uhuru gardens on 12, December 2021./
Image: MERCY MUMO

During such a sacred event, the Commander in Chief officially recognises or forms a new military base or unit for special assignments.

The second group of personnel comprised of KENBATT 20 personnel after they returned from peacekeeping duties in the United Nation Mission in South Sudan (UNMISS) in 2012. 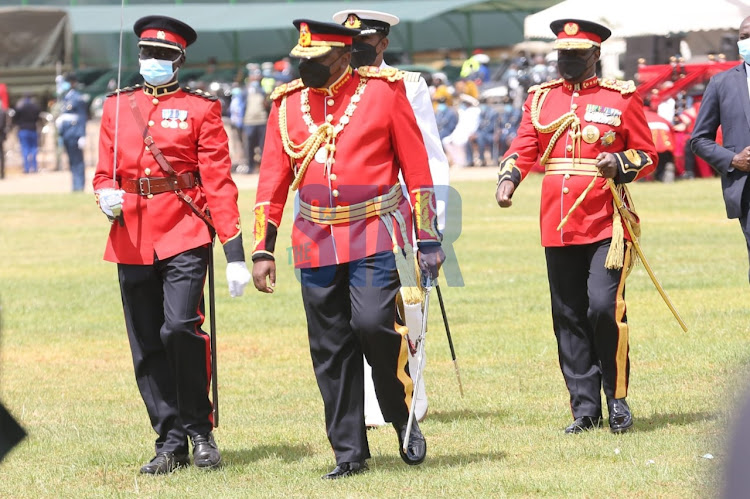 President Uhuru Kenyatta heads to inspect a guard of honour during the 57th Jamhuri Day on December 12, 2021 held at the Uhuru Gardens.
Image: Fredrick Omondi

The Unit was initially located at the Kenya Rapid Deployment Capability (KRDC) HQs in Embakasi Garrison.

In 2015 the Unit moved to Nanyuki in the Laikipia KDF Rifle Range.

There, the Unit continued to consolidate up her forces, bond, train and prepare for operations and other routine tasks.

19 Kenya Rifles battalion is currently located in Nyali Barracks in Mombasa county and is popularly known as the Ash Warriors.

The unit took over the Camp from the 17th Battalion the Kenya Rifles.

The Unit distinctive colour is Grey. 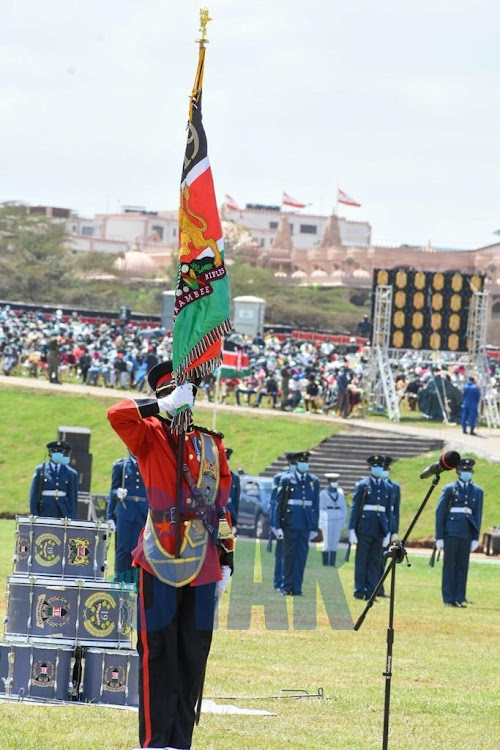 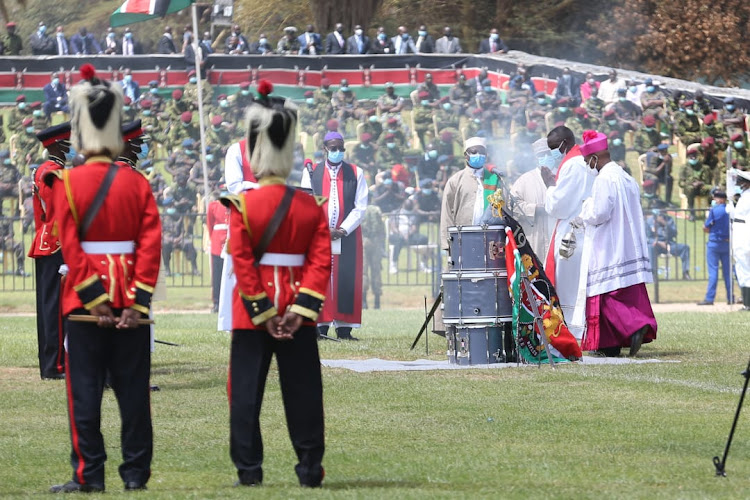 Blessing of the regiment colours during the 57th Jamhuri Day on 12 December 2021 held at the Uhuru Gardens. Kenya became a Republic in 1964.
Image: Fredrick Omondi
by MARGARET WANJIRU Health & Lifestyle Journalist
News
12 December 2021 - 15:46