NO PASTURE OR WATER

The Star toured Lumo Conservancy and found four carcasses of buffaloes, two young elephants and a that of a kongoni.

• Buffaloes and elephants are among wild animals that have died due to lack of water and pasture. 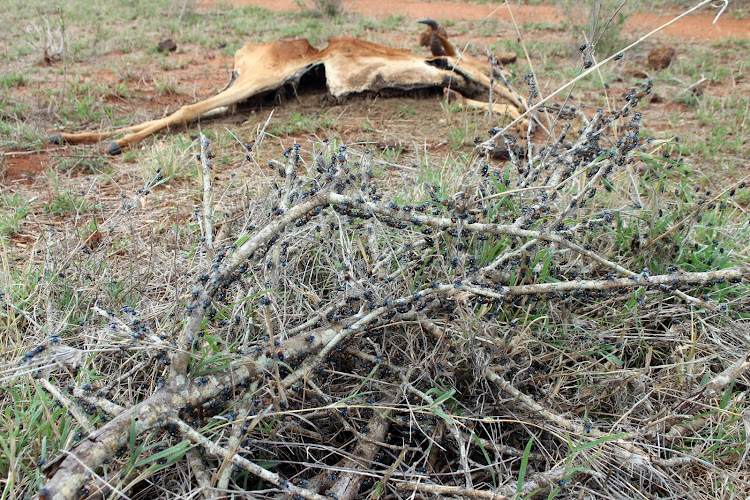 Flies near a carcass of hartebeest in Lumo Conservancy on the outskirts of Tsavo West National Park, Taita Taveta, on November 29, 2021
Image: ANDREW KASUKU

Wild animals are the latest casualties of the ongoing drought, with scores having died and others at risk.

At conservancies around Tsavo National Park buffaloes, elephants and hartebeests have died due to lack of pasture and water.

Grass and water pans have dried up.

The Star toured Lumo Conservancy, which borders Tsavo West National Park, and found four carcasses of buffaloes, two young elephants and a that of a kongoni.

At Mgeno Conservancy, officials told the Star at least eight water points have dried up since July this year. Only one water source remains.

He said the drought has led to increased competition for water and pasture.

“Mgeno is situated between Tsavo East and West. It is a key dispersal area and migration corridor, so we are experiencing abundance of wild animals. During the drought, most animals tend to look for water in the conservancies around the national park,” Ndong’a said.

“That interaction has created some aspect of pressure on this immediate environment where we have seen trees being brought down by elephants. The area is being subjected to erosion as a result of animal movement.”

According to a report released by the Ministry of Tourism and Wildlife in the first national wildlife census this year, the elephant population increased by 12 per cent in the past seven years to 36,169 while the number of giraffes rose by 49 per cent since 2019 to 34,240.