Badi said infection rates among adolescent girls in Nairobi is on the rise.

• Sexual and gender-based violence continues to increase in the country.

•  Nairobi alone recorded 3,716 cases between January and June this year. 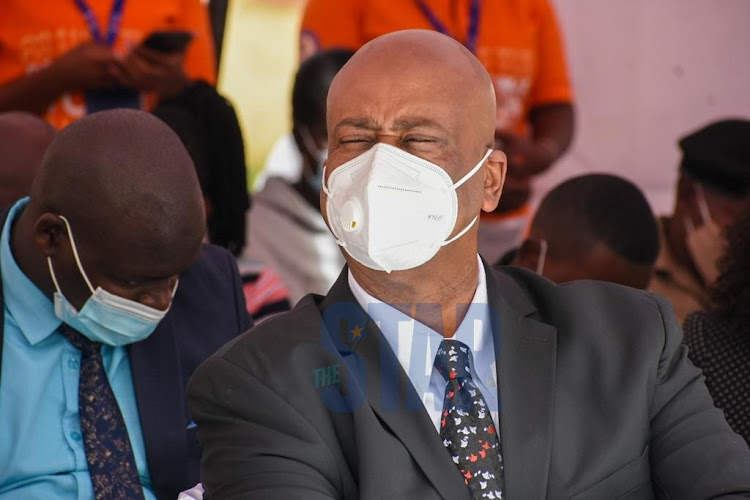 Director General NMS Mohamed Badi during the launch of the Nairobi County HIV/AIDS Implementation plan 2020/21-2024/25 and commemoration of World AIDS Day at Undugu grounds in Mathare on 1 December 2021. PHOTO/MERCY MUMO

A grim picture has been painted as statistics by the Nairobi Metropolitan Services reveal mother to child transmission rate for HIV in Nairobi is 10.1 per cent according to 2020 estimates.

This, as Nairobi has been marked to have the largest number or cases in the country, with an estimated 167,446 people living with HIV.

Despite 40 years since the first Aids cases were reported, he said HIV still threatens the world.

It is estimated that 40 per cent of new HIV infections occurs in adolescents and young persons between ages 15 – 24 years, with more burden felt among adolescents girl and young women, he noted.

The country spends Sh24 billion on HIV products every year.
News
2 months ago

Speaking while launching the Nairobi City County HIV & Aids Implementation Plan, Badi noted that the country still risks missing the target to end Aids by 2030 due to structural gaps that obstruct proven solutions to HIV prevention and treatment.

"As NMS, it has been noted that for us to eliminate HIV/ Aids by 2030 there’s need for ending inequalities through transformative change," Badi said.

As a result, NMS has started developing political, economic and social policies to protect the rights of everyone and pay attention to the needs of disadvantaged and marginalised communities.

Despite the HIV statistics, NMS also noted with concern that Nairobi recorded 4,932 of adolescent pregnancies in the last 20 months.

The pregnancies as revealed by the Badi-led entity occurred between January 2020 and September 2021 are of girls aged between 10-14 years.

This, as clients who attended the first Antenatal Clinic visit in the period of January 2020 to September 2021 over 13 percent were adolescents aged between 10–19 years in Nairobi.

Expressing concern, the director general noted that the statistics are in violation of Article 53 of the Constitution.

"What we have witnessed is rights of children being violated, which is contrary to Article 53 of our constitution which states all children should be protected from abuse, neglect, harmful cultural practices, all forms of violence, inhumane treatment and punishment, and hazardous or exploitative labour," Badi noted.

Consequently, the team has identified county structures to host the victims who have ongoing court cases, including centres in Makadara, Kayole and Shauri Moyo, awaiting the construction of a permanent structure at Mji wa Huruma.

In August, it was revealed that Sh68 million had been set aside towards the provisions of safe shelters.

City Hall will contribute Sh18 million, while the office of the Nairobi Woman Representative would give Sh50 million to construct safe shelters at Mji wa Huruma from this month.

Sexual and gender-based violence continues to increase in the country, with Nairobi alone recording 3,716 cases between January and June this year.

Some 3,450 cases were recorded last year, as per the data from the Kenya Health Information System.

Prof Bukusi: The weapons we will use to defeat HIV