'No turning back': Waiguru dismisses 'system' says support for Ruto is unstoppable

"There are some who are planning with the system..." - Waiguru.

• Waiguru said there is no turning back on her decision.

• She said her county is solidly in Ruto’s United Democratic Alliance. 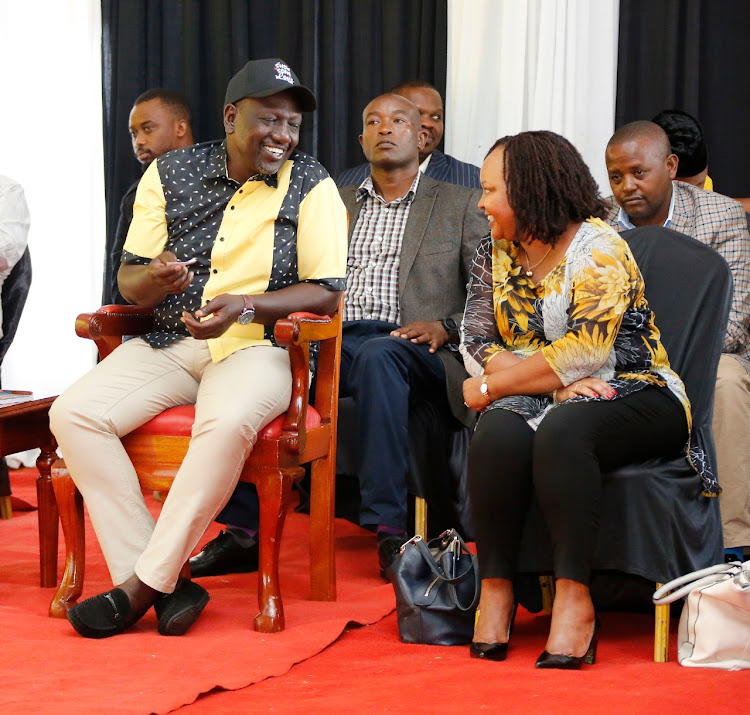 She spoke at the Deputy President’s Karen residence, where Ruto hosted more than 3,000 members of the 'Wamama na Hustler' group that has undertaken to promote the bottom-up economic model across the country.

Waiguru said there is no turning back on her decision.

In an indirect hit at President Uhuru Kenyatta’s men who are managing the succession politics behind the scenes, Waiguru said “some individuals” are relying on the “system” to have their candidate take over from the outgoing head of state.

She said her county is solidly in Ruto’s United Democratic Alliance.

“We in Kirinyaga are in UDA and we have decided we are not turning back. In Kirinyaga, we have resolved that our president in 2022 is William Ruto," Waiguru said.

Waiguru said the support shown to Ruto when he toured Kirinyaga on Sunday was similar across all Mt Kenya counties.

“The region is firmly behind Ruto because of his development credentials,” she said.

The Kirinyaga governor called on the country to rally behind the Deputy President because of the energy and focus he has in making Kenya a better country for everyone.

Eenmity between Ngirici and Waiguru was evident as they didn't greet each other.
News
2 months ago

Each camp carried placards with their preferred candidate.
Counties
2 months ago