She says the attacks troubled her because her work on the team is within the law.

•Koome urged the UDA politicians to instead celebrate the constitution, which protects the independence of the Judiciary.

•DPs allies on November 24 wrote a formal complaint to the CJ, urging her to keep off management of elections. 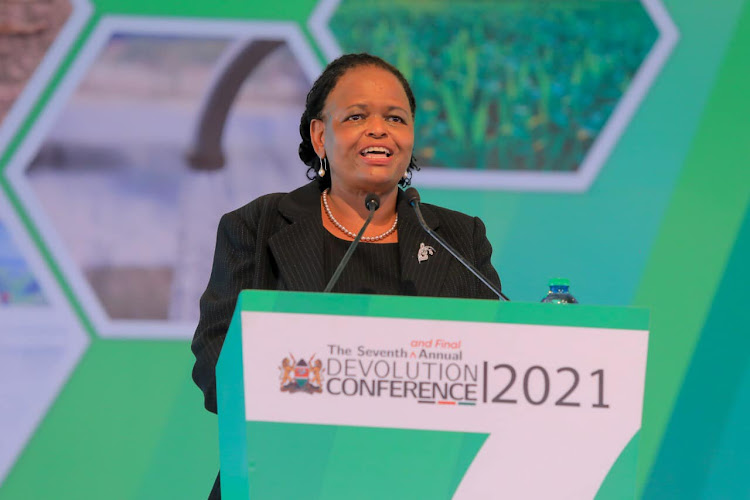 Chief Justice Martha Koome has told allies of Deputy President William she will not leave the Technical Working Committee for Election Preparedness.

The United Democratic Alliance and MPs allied to the party on Wednesday claimed that her continued involvement in the committee could interfere with free and fair elections in 2022.

Speaking at the ongoing Devolution Conference, Koome said the attacks troubled her because her work on the committee was within the law.

“I was attacked for attending the meeting. But the Judicial Service Act gives me the mandate to be the link between the Judiciary and other arms of the government,” she said in Makueni.

Koome urged UDA politicians to instead celebrate the Constitution, which protects the independence of the Judiciary.

“The independence of the Judiciary is deep. It cannot be taken away simply because I sat at the committee.  We are required by the constitution to coordinate with other organs. We cannot stand as silo,” she said.

DP's allies on November 24 wrote a formal complaint to the CJ, urging her to keep off management of elections.

The allies also made a similar call in Nandi and Uasin Gishu counties on Wednesday when they accompanied Ruto during campaigns.

The UDA complained of Koome's "continuous involvement in the working of the Technical Working Committee, which is tasked and mandated with 2022 election preparedness."

On Tuesday, Koome said government institutions are working together in preparation for the 2022 elections.

Koome, however, said the Judiciary will not compromise its independence and will not bow to any influence.

However, UDA, in its complaint, said, "We opine that your involvement in the consultative meetings of the Technical Working Committee is a clear violation of the Constitution, the Judicial Service Act 2011, the Leadership and Integrity Act 2012, the Public Officer Ethics Act 2003, the Bangalore Principles and the Code of Conduct for Judicial officers."

UDA said the Judiciary must be a neutral arbitrator of election disputes for aggrieved parties.

Ruto's allies also expressed concern that should the Judiciary be part of the elections management team; Kenyans will have nowhere to turn to in the event there are disputes.