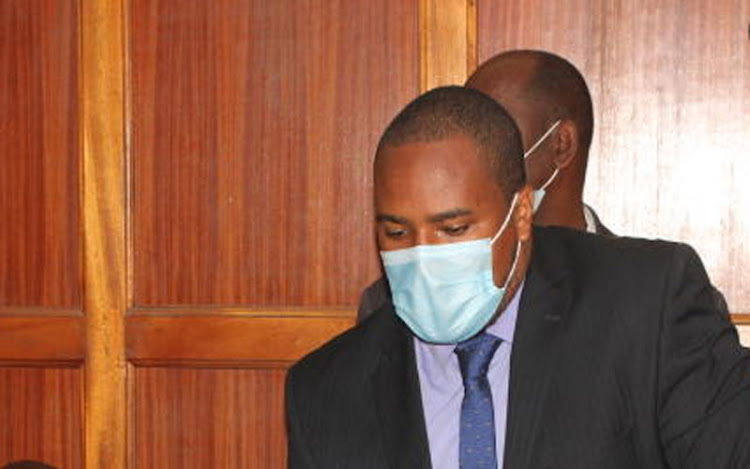 Dickson Mararo when he appeared in court in August 2021 over the shooting incident at a club on Thika Road on July 2, 2021.
Image: HANDOUT

A licensed gun holder is set to face murder charges after one of the victims he had shot at a club along Thika Road, Nairobi died in hospital four months later.

The victim who is a police officer identified as Festus Musyoka died in hospital Tuesday where he has been since July 2 when he was shot in the neck by the gun holder Dickson Mararo.

The incident happened at the club after an alleged tiff over who was the bonafide boyfriend of a youthful woman turned into a fight and degenerated into an exchange of gunfire injuring three people including two police officers.

The exchange of fire involved Mararo, who was a civilian licensed to carry a weapon and who is alleged to have shot the three who later on surrendered to the police.

Mararo’s firearm, a Glock pistol with 38 bullets, was confiscated until the case is determined.

He was freed on Sh5 million cash bail or Sh10 million bond. He has not afforded to leave prisons because the cash bail was too high.

He moved to court to seek the bail terms be reduced.

In October, he applied to trial magistrate Esther Kimilu to review the bond terms so that he can leave prison and attend his trial while outside.

On August 6, the court heard that Mararo, who is facing attempted murder charges, shot and injured his three victims at Quiver Lounge on the night of July 2.

The prosecution now plans to upgrade the charges to murder.

He has denied three charges of attempted murder at the club along Thika Road.

The charge sheet says Mararo attempted to cause the deaths of police constables Fetus Musyoka of Starehe division and Lawrence Muturi of Kasarani and waitress Felistas Nzisa.

Musyoka sustained gunshot wounds on his neck alongside his colleague from Kasarani’s petty crime unit, Muturi who was shot in the hand.