Say only IEBC should deal with elections management.

• The politicians said the Judiciary must be a neutral arbitrator of elections disputes for aggrieved parties.

• They spoke on Wednesday in Nandi and Uasin Gishu counties when they accompanied Ruto to rallies. 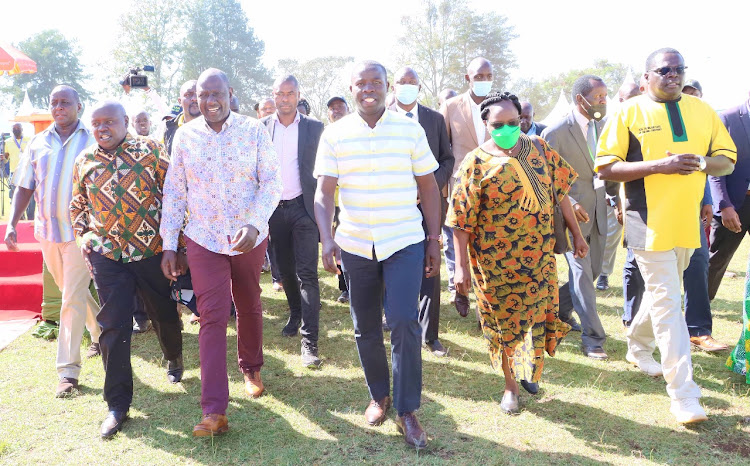 Deputy President William Ruto's UDA has written a formal complaint to Chief Justice Martha Koome, urging her to keep off management of elections.

Ruto's allies also made a similar call in Nandi and Uasin Gishu counties on Wednesday when they accompanied Ruto during campaigns.

The United Democratic Alliance complained of Koome's "continuous involvement in the working of the Technical Working Committee which is tasked and mandated with 2022 election preparedness."

The party said in a letter dated November 24, “It is our submission that your continued involvement in the Technical Working Committee is likely to interfere with and shall threaten free and fair elections come 2022 general elections."

This comes as Koome on Tuesday said government institutions are working together in preparation for the 2022 elections.

Koome, however, said the Judiciary will not compromise its independence and bow to any influence.

However, UDA, in its complaint, said, "We opine that your involvement in the consultative meetings of the Technical Working Committee is a clear violation of the Constitution the Judicial Service Act 2011, the Leadership and Integrity Act 2012, the Public Officer Ethics Act 2003, the Bangalore Principles and the Code of Conduct for Judicial officers."

UDA said the Judiciary must be a neutral arbitrator of elections disputes for aggrieved parties.

Ruto's allies also expressed concern that should the judiciary be part of the elections management team; Kenyans will have nowhere to turn to in the event there are election disputes.

The MPs urged Koome not to allow politicians to tarnish the reputation of the Judiciary that had earned the trust of Kenyans.

"Our Judiciary has been very independent and we must ask Justice Koome to help our Judiciary to continue being as independent as it has been. She must not allow herself to be recruited into an illegal and unconstitutional outfit,” Ichung'wa. said

Murkomen said Koome had no business engaging in election management with individuals who have already made their political stand known to Kenyans.

"To continue maintaining the independence of the judiciary, I want to ask Justice Koome with utmost humility to run away from those conmen pretending to be persons presiding over our elections."

Duale said it was unconstitutional for Justice Koome to seat in a technical committee that deals with the management of elections and still be the President of the Supreme Court.

The former National Assembly Majority leader said both of her predecessors Justice Willy Mutunga and Justice David Maraga never participate in such an unlawful exercise.

He urged Koome to exercise the independence of her office and steer clear of political outfits managed by impartial civil servants.

"You cannot wear two hats by being part of the preparations and management of elections and when the elections are over, you want to wear another hat as an independent Judicial officer in the determination of the presidential election disputes."

Governor Sang called on independent institutions overseeing elections to exercise their mandate independently and in accordance with the Constitution.

The Deputy President assured Kenyans that leaders will work together to ensure peaceful and democratic elections in 2022.

He asked leaders to allow Kenyans to make independent choices in the 2022 elections without intimidation.

"We have faith that Government institutions will ensure there is peace in Kenya. As leaders, we will make sure Kenyans have the opportunity to elect leaders of their choice devoid of threats, intimidation, or unlawful and unconditional practices,” Ruto said.

Ruto said that those in the Hustler Nation have an elaborate plan that will address the country's economic challenges, which have resulted in high unemployment rates.

He urged Kenyans to shun tribal politics and work with other Kenyans to transform the country.

We'll not bow to pressure or influence, Koome tells state

She said that every department and arm of government will jealously guard their independence.
News
7 months ago

However, Ruto's allies said the Judiciary must be a neutral arbitrator of elections disputes for aggrieved parties.

They spoke on Wednesday in Nandi and Uasin Gishu counties when they accompanied Ruto to rallies.

“It is only the Independent Electoral and Boundaries Commission (IEBC) that is mandated with the management of elections in this country,” said Ichungwa.