WHO says antimicrobial resistance is one of the top 10 global public health threats facing humanity.

• The global health agency warns that the cost of AMR to the economy is significant.

•Without effective antimicrobials, the success of modern medicine in treating infections would be at increased risk. 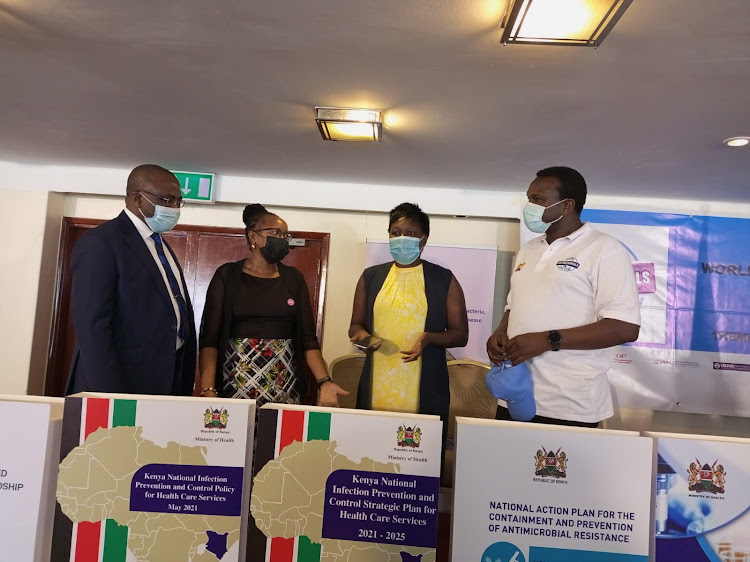 Kenya joined the rest of the world in marking World Antimicrobial Awareness Week. The week runs from November 18 to 24 every year.
Image: MAGDALINE SAYA

Misuse and overuse of antibiotics is the main driver of drug resistance, the World Health Organization has said.

WHO has declared that antimicrobial resistance is one of the top 10 global public health threats facing humanity.

The misuse of these drugs puts treatment of diseases such as malaria, tuberculosis and HIV-Aids at risk unless urgent action is taken to reverse the trend, it said.

AMR occurs when bacteria, viruses, fungi and parasites change over time and no longer respond to medicines making infections harder to treat, increasing the risk of disease spread, severe illness and death, according to the global health organisation.

Without effective antimicrobials, the success of modern medicine in treating infections, including during major surgery and cancer chemotherapy, would be at increased risk.

“Up to 30 per cent of patients who undergo surgeries could die of resistant bacterial infections. Between 2016 and 2017, a situational analysis carried out in Kenya showed this problem is with us,” Dr Ramona Ndanyi said.

WHO acting representative to Kenya Juliet Nabyonga said, “The WHO is supporting the Pharmacy and Poisons Board to estimate the quantities of antimicrobials consumed in the country in the human health sector.”

WHO has also associated the problem to lack of clean water and sanitation and inadequate infection prevention and control, which in turn promotes the spread of microbes, some of which can be resistant to antimicrobial treatment.

“I do not know whether hospitals have a routine way of taking environmental swabs and testing them for organisms that are living with them, so I would encourage them to be picking on a regular basis so that they can know what they are dealing with,” John Kariuki, the assistant director of Veterinary Services at the Ministry of Agriculture, said.

"Very soon we are going to face a very big problem of being unable to treat simple conditions,” Kariuki said.

High rates of resistance against antibiotics frequently used to treat common bacterial infections, including urinary tract infections, sepsis, sexually transmitted infections, and some forms of diarrhoea have been observed worldwide, indicating the world is running out of effective antibiotics.

Kenya joined the rest of the world in marking World Antimicrobial Awareness Week. The week is celebrated from 18-24 November every year.

It is aimed at encouraging policymakers, healthcare providers, and the general public to recognise that everyone can be an antimicrobial resistance awareness champion.