We'll not bow to pressure or influence, Koome tells state 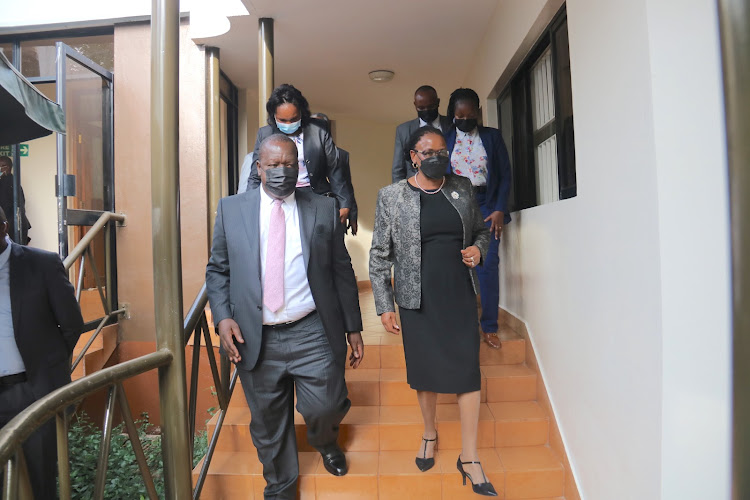 Government institutions are working together in preparation for the 2022 elections, Chief Justice Martha Koome has said.

Koome, however, said the Judiciary will not compromise its independence and bow to any influence.

She told reporters on Tuesday that state institutions working together does not mean their independence will be comprised.

Other state officials were PS Karanja Kibicho, Jerome Ochieng’ and CASs, as well as representatives from the police and legislature.

Koome said that every department and arm of government will jealously guard their independence and will only accede to agreements that serve the purpose easing coordination for the 2022 polls.

“Each one of us [here] knows what we are supposed to do. It is like holding a rope and each of us holds the section they are supposed to and does their part with vigour,” she said.

The CJ said the forum she leads does not discuss the details of the dockets and so there is no avenue for influence.

“So when we sit here, we do not discuss any merit of any of the mandates that are given to the agencies because what we need to do with each other is coordination and collaboration," Koome said.

“We believe that this consultative forum is for a season...” she added.

Observers say Koome's strong assertion of independence is aimed to allaying fears in some quarters that critical institutions, including the Judiciary and the IEBC, could be subject to compromise in view of the coming polls.

She also announced that the forum had adopted a work plan to guide it in the run up to the elections.

The work plan was developed by a technical working committee set up by the lobby.

The work plan sets the activities that need to be done and the timelines to be observed as the country prepares for the 2022 general election.

The secretariat of the caucus meets on Thursday to fine-tune the plans.