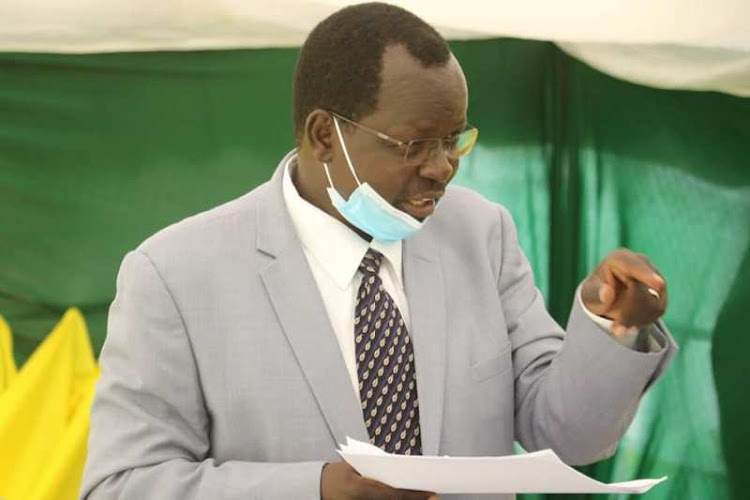 The quartet, seen as shapers of the region’s politics, vowed to back Raila in quest to take over the country’s leadership in August next year.

At a rally in Makutano, Poghisio urged other presidential aspirants to back Raila for the top job.

"We shall all unite from our various political parties and give you [Raila] the presidential votes,"Phogisio said, adding that Raila will be the fifth Kenya's president.

Earlier, Phogisio openly said he has kept on telling One Kenya Alliance leaders that Raila is the best choice.

"Very few people can reason like you do,” he said.

It was not immediately clear if Phogisio had the blessings of Gideon. However, Gideon is known to be a close ally of Raila, a contention that has recently rocked Oka.

Lonyangapuo's grip of the region is evidenced by the traction his newly launched political vehicle – Kenya United People – has attracted in the last one month.

KUP, according to the governor, is meant to champion the interest of the pastoralist community scattered across more than 10 counties.

The leaders resolved to stick with Raila to the end, saying he is the best suited than all the aspirants who have declared interest for the presidency.

Pkosing, elected on the Jubilee ticket, announced he has joined Raila’s camp and will be accompanying the former prime minister in his vote hunting mission across the country.

“I have not come to your rallies but from today, I will be the master of ceremonies in your rallies,” Pkosing said.

In a memorandum read by the county boss, the community told the ODM boss to, among other things, prioritise creation of an additional county called Pokot East and two more constituencies.

They said this will help correct historical underrepresentation in the area.

The region, which boasts of more 300,000 votes, also wants not to be grouped as Kalenjins but given a community code to make them distinct as their neighbours, the Masaai and the Samburu.

Lonyangapuo said the region has lagged behind as every subsequent government has offered promises which are forgotten immediately after winning elections.

“Recently, the elders here told me to tell anyone who wants the votes of Kenyans living in West Pokot to ensure all primary schools are converted to low cost boarding schools and abolish the delocalisation policy,” the governor said.

The governor also called for consideration for state appointments, saying the community is not well represented at the top.

“We are requesting that in your government, give us at least one Cabinet Secretary, at least three ambassadors and four PSs,” he said.

“The county with the highest shortage of teachers in the country is West Pokot. We ask you to consider recruiting 200 primary and 100 secondary schools teachers every year in West Pokot.”

Junet said it is shocking that Ruto is making new promises, even after being in the office for nine years.

The National Assembly Minority whip said those in office should campaign based on performance and not promises.

“You are making promises and you are in government. What have you done with the nine years? Only Raila should give promises because he is not in office,” Junet said.