Some of the leaders who attended snubbed the joint press conference

•Only ten out of the 47 county chiefs, mostly Ruto allies, attended the meeting at DPs official residence in Karen.

•It was not immediately clear why the top officials skipped the meeting. 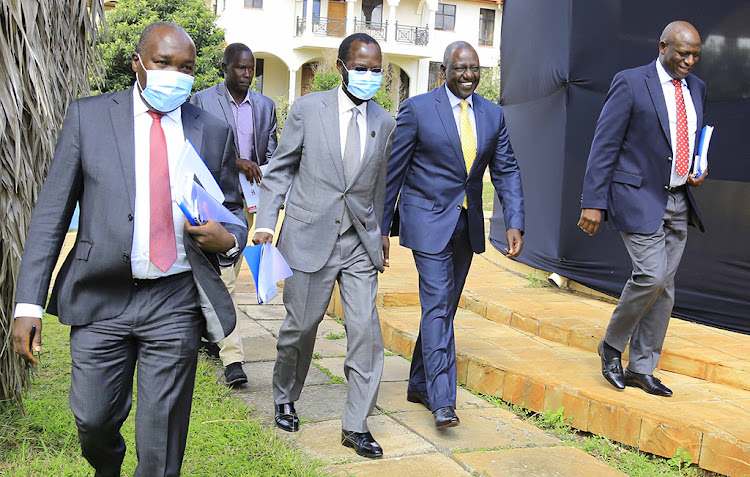 Cabinet secretaries and pro-handshake governors skipped a key meeting hosted by Deputy President William Ruto on Monday, lifting the lid on his diminishing influence in government.

Out of the five Cabinet secretaries invited to the Inter-governmental Budget and Economic Council meeting, only Devolution CS Charles Keter attended.

Only 10 out of the 47 county chiefs, mostly Ruto allies, attended the meeting at DP's official residence in Karen, Nairobi.

Those who attended were Council of Governors chairman and Embu Governor Martin Wambora, Ndiritu Muriithi (Laikipia) and Stanley Kiptis (Baringo).

When it was time to address a joint press conference, Wambora, Nyong'o, Nanok, Muia and Korir left.

It was not immediately clear why the top officials skipped the meeting.

However, most of the Cabinet secretaries have publicly clashed with Ruto and his allies and some of the technocrats do not see eye-to-eye with him.

“They move around claiming farmers have not been paid a huge bonus. Where would the bonus come from when your people who were in charge of factories stole everything?” Munya posed.

Governor Muriithi alluded to the fears of bad blood that was widely expected to characterise the meeting.

Muriithi, who is one of the leading lights from Mt Kenya rooting for the former Prime Minister Raila Odinga to succeed Uhuru in 2022, however, said political differences did not feature.

“Some members of the fourth estate may be disappointed. Some people feared that perhaps the meeting would be stormy. I thank our Excellency for proving to us that we may have differences of opinion on a variety of issues,” he said

“However, we as leaders, we must always, in the execution of our mandate work beyond and above our differences even indeed the interpretation of technical data.”

Muriithi said it was clear that as leaders, they could move forward together when duty calls.

Cabinet secretaries Yatani, Fred Matiang'i (Interior) Joe Mucheru (ICT), Munya and other governors have turned against the DP as far as 2022 succession politics are concerned.

The pro-Uhuru allies are against Ruto and pushing for the President’s succession plan.

Uhuru and the Cabinet secretaries have often accused the DP who has been traversing the country marketing his bottom-up economic model and UDA for engaging in early campaigns instead of working.

However, the DP on Monday noted that he was yet to start campaigns, saying he was doing part of his mandate —  inspecting government projects and conducting public participation as well as collecting feedback from Kenyans.

“I haven't started campaigning because IEBC is yet to announce. What I am doing is part of my mandate — understanding the issues of the people, assessing the extent of our government programmes and receiving feedback from the public,” he said.

The IBEC made several recommendations to ensure prudent and transparent use of fiscal resources.

The recommendations seek to enhance the spirit of cooperation and consultation between national and county governments.

The meeting resolved that the Controller of Budget, Auditor General and National Treasury meet county governments to define and profile pending bills and recommend how they can be tackled so that they do not impede development.

The call comes barely a month after Commission on Revenue Allocation urged governors to settle all pending bills before the general elections, citing problems with unpaid bills saddling new administrations.

CRA chairperson Jane Kiringai said incoming administrations may not prioritise pending bills of Sh11.4 billion as at end of June.

IBEC recommended that the own source revenue Bill and the conditional grants bill in parliament be fast-tracked.

The County Governments Grants Bill, 2021, provides a legal framework for the release of conditional grants and donor funds.