Ruto: Those pushing for Raila presidency are selfish

DP says some leaders agenda was only to secure power for their own interests and survival. 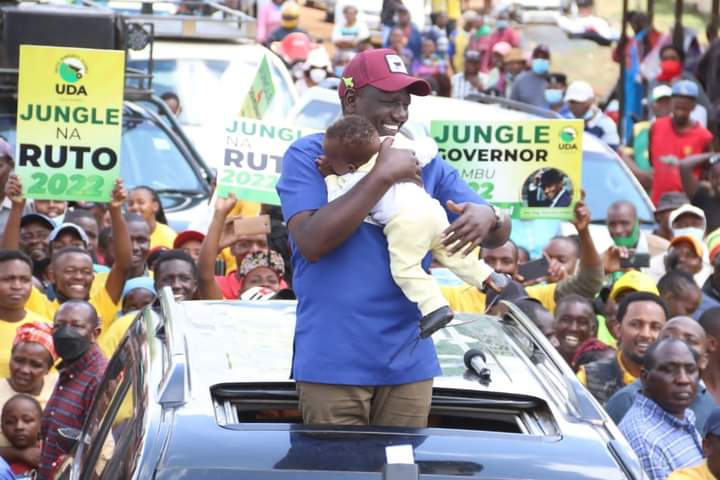 Deputy President William Ruto has said Kenyans should  not be coerced to support particular candidates ahead of 2022 general election.

He said some individuals who were forcing some leaders to rally behind opposition leader Raila Odinga were only interested in safeguarding their interests at the expense of millions of Kenyans.

Speaking in Thika Town during his empowerment tour of Kiambu County on Saturday,  Ruto said some leaders agenda was only to secure power for their own interests and survival.

"Most of the leaders you see coming together have no interest of ordinary Kenyans. Their only interest is political posts to protect their interests," he said.

Ruto said many leaders were not interested in economic wellbeing of Kenyans and had no manifesto to show what they will do once they ascend to power.

He said the bottom up economic model was the only sure way of safeguarding interests of ordinary Kenyans.

"There is no greater priority in Kenya than to get rid of unemployment affecting millions of our youths ," said Ruto.

The DP said some leaders were in panic mode after realizing that the bottom up economic model was auguring well with Kenyans and their needs.

He said most leaders were wasting time talking negatively about "William Ruto" instead of selling their agenda to Kenyans.

"Before we change the constitution to create more positions for leaders, we have to create jobs and  guarantee future of our youths," said  Ruto.

He noted that Odinga development track record was unknown, saying he is well known for rhetoric.

"The guarantee and security of our future is the youths, we have to invest in programs that will guarantee jobs to them," said Ruto.

The DP also made stopovers at Ngoriba, Gatuanyaga, Makongeni and Kiganjo grounds.

Meanwhile, Ruto pledged to set aside Sh150 billion when he becomes president to economically empower the lives of ordinary citizens.

"Our bottom up plan combined with big four will work next year, biggest priority is to address unemployment among young people," he said.

He added that Sh100 billion would be invested towards programs that directly create jobs and opportunities to unemployed youths.

Another Sh50 billion would be set aside for small and medium entrepreneurs to access cheap loans to expand their businesses.

Ruto said his government would strive to save small scale traders and other Kenyans from costly credits, mobile loans and shylocks.

The MPs on the other hand, warned Kitui Governor Charity Ngilu against disrespecting the DP.

Nyoro at the same time told Interior PS Karanja Kibicho to stop undermining and insulting Kenyans, adding that he has become too arrogant.

Gachagua said the only sure bet for ordinary Kenyans was  Ruto who has pledged to empower them starting from bottom going up.

Waititu said there should be no sacred cows in the fight against corruption and those implicated should be arraigned in court.

Kangata said those who caused chaos during  Ruto visits in Kisumu, Kieni and Busia should be apprehended adding  there was selective application of the law.