• Election (Amendment) Bill, 2021, was published on October 1 and is queued for first reading after MPs resume from recess on November 9.

• CIOC chairman Jeremiah Kioni (Ndaragwa MP) says plan is to deal with integrity concerns in the party lists submitted to the IEBC. 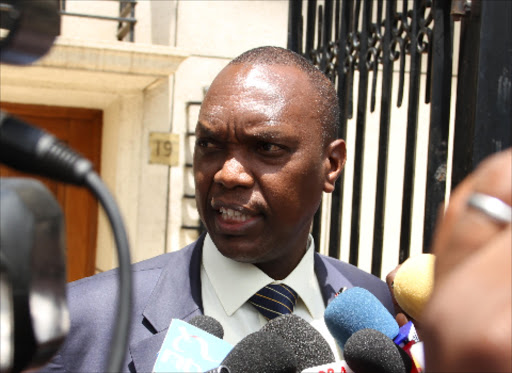 Political parties will not be allowed to nominate "foreigners" as members of the county assembly in radical proposals to end cases of favouritism by political parties.

A new bill before Parliament makes it mandatory that political parties can only nominate persons who are registered as voters in the county where they are to be nominated.

It seeks to change the Elections Act to provide that persons nominated to county assemblies by political parties in line with Article 177 of the Constitution shall be persons who are registered voters in the county in which they are nominated.

The committee is chaired by Ndaragwa MP Jeremiah Kioni.

Kioni told the Star in an interview on Monday that the bill’s intention is to bring honesty and integrity in the nomination process by political parties qualified for the special seats.

“We have seen political parties misuse the nominations. We want people to get their rightful share of support for parties. If an area managed to get a particular number of votes, they should be the ones to benefit,” he said.

The lawmaker said the bill would end “scenarios where people are involved in a political process and those who benefit belong elsewhere or are from outside the county.”

Currently, there are 772 nominated MCAs – largely Jubilee and ODM, on top of the 1,450 elected across the 47 county governments.

“It is a question of honesty and integrity in the party nomination process and having people get the rightful share of what they have worked for. That is exactly where we are heading to. Political parties have to justify why they are nominating a given candidate,” the MP said.

In the wake of the law failing to specify the need for such persons to be registered within the jurisdictions they are nominated, there has been an outcry on the party listing process.

Parties, in the section of the law set to be amended, are required to nominate members to represent marginalised groups and for gender top-up.

In 2017, special interest groups threatened to sue political parties over unfair nomination, citing the inclusion of foreigners and instances of nepotism.

Naivasha residents rejected a nominee for Nakuru county assembly on grounds of being linked to one of the MPs from the county.

They further said the nominee was not a resident of the county, having been registered as a voter in Kabete constituency, Kiambu county.

ODM members in Taita Taveta equally protested unfair distribution of the special seats in the 2017 vote saying there was no single person living with a disability.

PWDs in Kwale also cited the non-inclusion of their members in the nomination with ODM backers in Taita Taveta singling out the nomination of persons who supported rival candidates.

"The rules submitted shall be the rules as deposited with the Registrar of Political Parties."
News
3 months ago

MPs back bill to delay submission of nomination lists

Why MPs are pushing for nomination after polls

They see proposed amendment as a fall back strategy if they are rejected at the ballot.
News
5 months ago
by MOSES ODHIAMBO Journalist and Political Writer
News
01 November 2021 - 23:00