Matter to be mentioned on Friday.

• She women in the vicinity what had happened and later the matter was reported to the police and after that the accused person was arrested.

•The magistrate while responding to the allegations raised by the prosecution on whether the the CCTV footage could be used in court rejected the idea. 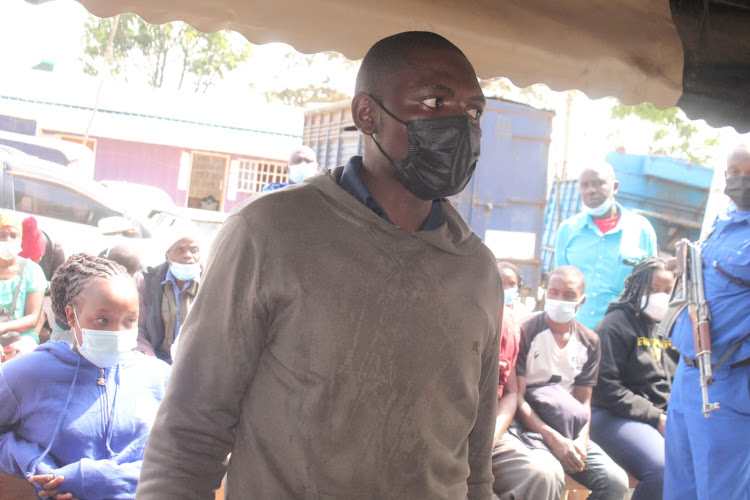 Mark Ambeyi Mutongoi accused of illegally recording a woman who was in a washroom PHOTO: CLAUSE MASIKA

A man accused of recording a woman who was in a washroom in Westlands has told the court that he did so to please his eyes.

He told Kibera senior principal magistrate Charles Mwaniki that at the time he committed the offence, he was possessed.

Mark Mutongoi, according to court assistant Lucy Ngei, who read the charge sheet, took the video of Margret Wangari intentionally and unlawfully without her consent.

He committed the offence on October 7 at Rubis petrol station in Westlands within Nairobi county.

Court prosecutor Robert Ogallo said the complainant had visited the station to fuel her car and later decided to go to the washroom.

"After she was done she heard some movement behind the washroom," he said.

Ogallo told the court that it was that movement that made the complainant realise that the accused person had placed a phone on the window of the washroom recording her.

She told women in the vicinity what had happened and later the matter was reported to the police and after that the accused person was arrested.

Court prosecutor Robert Ogallo urged the court to use the CCTV footage as exhibit but the magistrate ruled that it was not mandatory for it to be used in the case.

He directed that the matter be mentioned on Friday for more directions.