•Said the lies and propaganda against the ODM boss  have been dispelled. 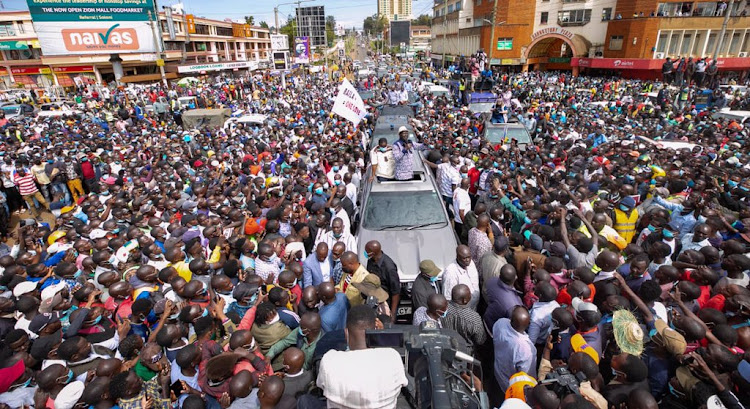 Raila'sallies led by Elgeyo Marakwet Governor Alex Tolgos met in Eldoret on Sunday to review the Odinga’s trip and said they were excited he attracted massive support from the region.

Odinga met more than 400 delegates from North Rift counties at Kenmosa village before he moved to Eldoret town where a massive crowd welcomed him, surprising allies of DP William Ruto considered the political kingpin of the region.

“We thank residents  for turning up in large numbers to welcome him and we believe what we saw was just the tip of what lies ahead.  Odinga will enjoy support in this region contrary to the thinking that it’s someone’s zone," Tolgos said.

But a group of Ruto allies said they would host a parade of his supporters led by more than 80 MPs in Eldoret to show the region is solely behind the DP.  Ruto will not attend.

Tolgos is the only governor backing Odinga in the region, he led the team that hosted the the ODM leader and also chaired the review meeting when they agreed to campaign aggressively for Raila.

“We will roll out massive door-to-door campaigns to ensure we join other Kenyans in ensuring  we back Odinga to be our next president because he is the only one with the capacity to carry on with the President Kenyatta's good work.

He was with other Odinga allies from the region including former assistant minister Stephen Tarus and Kipkorir Menjo, among others. During the Friday meeting several leaders, including Kieni MP Kanini Kega  insisted Odinga will get the majority votes in the Mt Kenya region, despite claims  he is not popular.

Kega said the region was now more receptive to Odinga than in previous years when a lot of propaganda and lies damages his reputation.

The MP says the situation in the region had now changed and Odinga had won the hearts of many residents of Mt Kenya. “Come election time  we will all be voting for Odinga because the Mt Kenya region now backs him strongly," Kega said.

Kakamega Governor Wycliffe Oparanya said Kenyans should register as voters and be ready to exercise their democratic right during the 2022 polls.

Oparanya said the youth must particularly take seriously the voter registration exercise because they have a larger stake in the country's future.

The county boss says Kenyans must also be ready to vote for a trustworthy and corruption- free leader to succeed President Kenyatta. “I support Baba because he is a trustworthy leader who has fought for this country all his life," Oparanya said.

Raila brings Eldoret to a standstill, pledges goodies for farmers

Raila hits out at Ruto over donations, pledges to seal graft loopholes if elected