• Suspect to be produced in court on Monday.

• The suspect will be presented before the High Court in Eldoret to face murder charges. 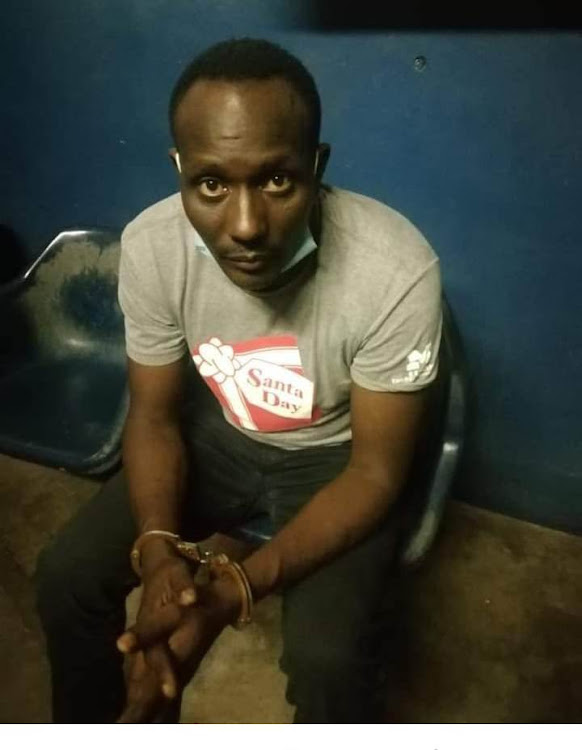 EMMANUEL Emmanuel Rotich when he was arrested in Mombasa before being taken to Iten over alleged links to the murder of athlete Agnes Tirop
Image: COURTESY

Homicide detectives have collected CCTV cameras from the home of slain athlete Agnes Tirop in Iten town, as her husband who was arrested in Mombasa was moved to the region.

Emmanuel Rotich who lived with Tirop is the main suspect in the killing and had fled to Mombasa after the incident but was arrested when the car he was driving was involved in an accident during curfew hours.

Keiyo North OCPD Evans Makori on Saturday said the house where Tirop was found dead with a stab wound on the neck remained a crime scene as police finalise investigations.

“Since the suspect was arrested he is in custody helping us with investigations,” said Makori.

Sources said the suspect would be produced in court on Monday where police will seek more time to hold him so  homicide detectives can complete the investigations.

The suspect will be presented before the High Court in Eldoret to face murder charges.

Hundreds of friends, relatives and political leaders continued to visit Tirop's parents' home near Mosoriot in Nandi county to condole with the family which as started plans for the burial.

The Directorate of Criminal Investigations said that he would be arraigned to answer murder charges.
News
3 months ago

An autopsy will be carried out this week after which the body will be moved to the Moi Teaching and Referral Hospital mortuary in Eldoret ahead of the burial.

Family members and friends have narrated how Tirop faced marital problems including violence in the days leading to her death.

Her parents Vincent and Dinah Tirop said they were devastated by her death.  “She was a very good girl and really loved us as her parents. We never expected her life would be cut shot in such a manner,” said her mother Dinah.

Her father visited the house where she was found dead and police also recorded statements from tens of people including friends and relatives concerning her last moments.

Athletes in the region are also planning prayers in Iten in remembrance of Tirop.

Police are investigating a possible love triangle that could have led to the killing of World 10,000 meters bronze medalist.

She was the 2015 World Cross Country Champion and had also participated in the recent Tokyo Olympics 5,000 meters race where she finished fourth.

Some athletes said the family problems she was going through had taken a toll on her and at times she looked disturbed but during training she would relax while with colleagues.

The colleagues revealed that Agnes did not have any social media accounts because of restrictions from her family.

She will be buried at her parent’s home on a date to be announced.

Federation's president Jack Tuwei reiterated his earlier call to athletes to reach out  for assistance in case of any problems at home, including ...
Sports
3 months ago

The suspect was arrested while driving in a private car in Changamwe.
News
3 months ago

The country is still reeling in shock at the murder of world 10,000m bronze medalist Agnes Tirop whose body was discovered with stab wound in their ...
Sports
3 months ago
News
17 October 2021 - 09:34