Government sets aside Sh1.2 billion for drought intervention in November

There is a Hunger Safety Net with regular transfer of funds to support 100,000 households

• According to the National Drought Management Authority, 23 counties are at risk of being food insecure.

• These counties have been classified into three groups based on the level of risk of severe drought and the cost of drought response. 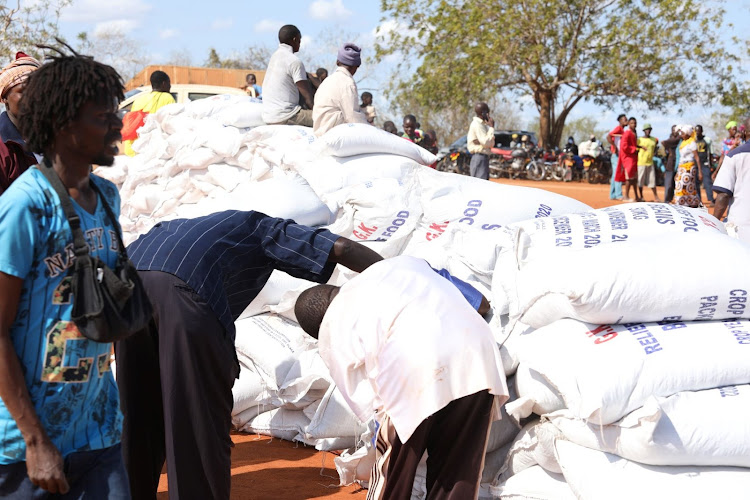 The Government has set aside an additional Sh1.2 billion for drought intervention for the month of November.

Government Spokesperson Cyrus Oguna said the state has continued to provide support to Kenyans who are faced with food distress that has been occasioned by the ongoing drought in certain parts of the country.

He said the distribution of physical food for the month of October to all the affected counties is in progress, for which the government has spent Sh1.2 billion to procure.

Oguna spoke on Wednesday during a media briefing on the interventions against drought in the country.

He said the drought, which is largely due to poor rainfall in the last two seasons, particularly in the ASAL regions, has affected both humans and livestock.

According to the National Drought Management Authority, 23 counties are at risk of being food insecure.

These counties have been classified into three groups based on the level of risk of severe drought and the cost of drought response.

Oguna said in order to mitigate the impact of drought in the affected counties, the government has upscaled intervention efforts through the provision of assorted relief assistance to the affected families.

The interventions include food distribution and water trucking where county governments in collaboration with the national government has continued to distribute water for domestic and livestock use to the affected regions.

There is the Hunger Safety Net where the regular transfer of funds to support 100,000 households in which every household in Mandera, Wajir, Marsabit and Turkana Counties receives Sh5,400 every two months has been upscaled to cover many more households.

“The Inua Jamii which is a social protection programme in which over one million households countrywide have been receiving cash transfer of Sh2,000 per month to protect the elderly, orphans and PWD. This has provided supplemental intervention in areas experiencing drought,” he said.

He said the plan for intervention beyond December is ready as the government continues to mobilize resources to mitigate the situation.

“However, the deployment of resources into the new year will depend on the performance of rain in the coming days,” the spokesperson said.

He called on organizations, and individuals of goodwill to come forward and provide any form of support.

“Kenyans are also encouraged to be mindful of their neighbours, and those who are blessed with a little more, to come out and share with those that are less privileged. As a people, we are known for standing with one another during such times. This is the spirit that is called for during situations of this nature,” Oguna said.

• EU has availed Sh500 million to be used to aid in intervention. So far over Sh260 million has been spent in the sectors of education, health and nutrition, livestock feeds, security and water trucking.

• FAO has availed Sh380 million, and has also bought 32,000 bags of cattle feeds which have already been distributed to the affected areas.

• WFP is to mobilize Sh500 million to aid in the provision of assorted relief.

• The UN system in the country launched Flash Appeal for local and international help amounting to Sh13.9billion.

Kwale residents in urgent need of food as drought worsens

More than 200,000 people in Samburu, Kinango and parts of Lunga-Lunga subcounties starving
Counties
1 week ago