• Koome said some advocates have yet to embrace expeditious ways of disposing of cases.

• She said the highest court will no longer entertain adjournments. 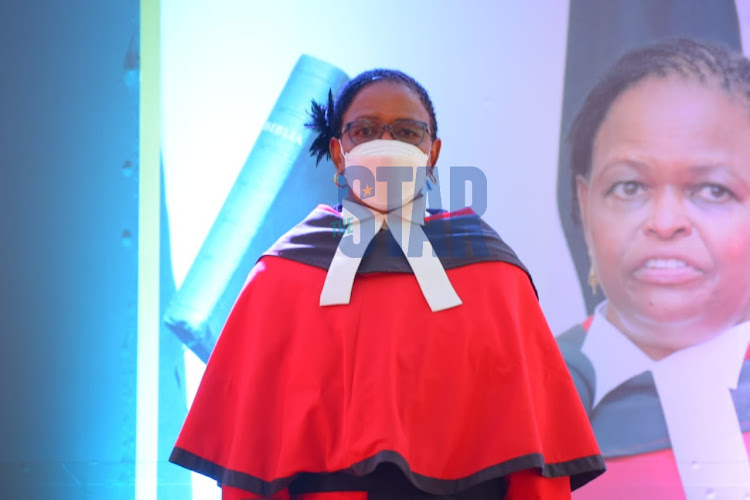 Koome, who was speaking on Tuesday in Mombasa during the induction of the new Supreme Court judges, said some advocates are yet to embrace expeditious ways of disposing of cases.

“We must send a strong message to the legal fraternity that once a matter has been set for hearing, it is going to be heard. We are actually abolishing the word adjournment at the Supreme Court because we do not want to hear it," she said.

The CJ said the apex court is in the process of developing a policy that will not entertain delaying cases by advocates. Koome said the policy will include guidelines on the interpretation of adjournment.

“We will take it that they do not want to highlight their submissions and we will adopt them as they are,” Koome said.

The CJ said that by May 31, the Supreme Court had a backlog of 27 cases and several of such cases have been heard and are awaiting judgment.

Also, 56 per cent of cases from the Court of Appeal were heard within 90 days after they were filed at the Supreme Court, which also heard and issued judgments on the first dates they were scheduled.

The court also achieved 54 per cent of issuing judgments and rulings 90 days after the close of submissions.

The six-judge bench further achieved 106 per cent court clearance, thus reducing the backlog by 10 per cent.

Koome emphasised the need to ensure no cases pends more than three years at the trial court and more than one year at the appellate court.

The CJ said the Supreme Court is focused on being a role model that other courts could emulate.

“This court should set standards and we must thrive at being excellent in service delivery,” she said.

The top court also intends to introduce online filing to complement the virtual hearings and issuance of judgments.