Professionals and prominent personalities from the region agreed to the plan 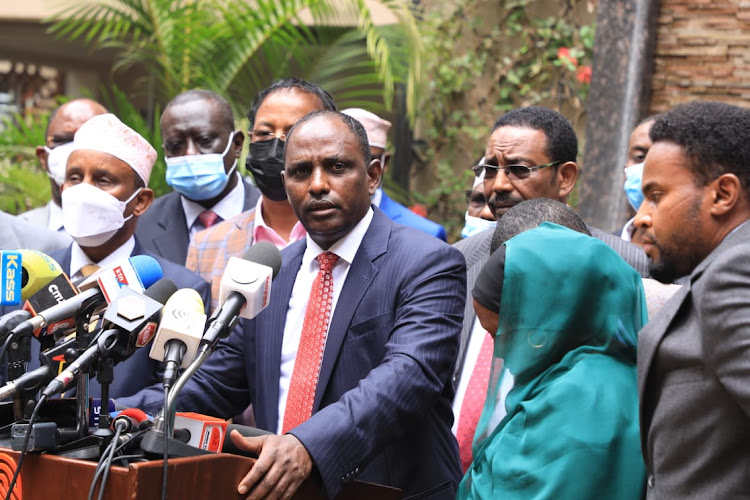 More than 60 professionals and prominent personalities from the public service, academia and private sector have agreed to come up with an economic plan for the region. The team is led by National Treasury Cabinet Secretary Ukur Yatani.

Speaking during a meeting with Asal leaders at a Nairobi hotel over the weekend, Yatani said urged professionals to contribute to the development of the blueprint.

“Let's not be captive to fear of our past, controversies and naysayers. Instead, let us look ahead and craft our destiny at this important time," he said.

"Let's put our heads together as professionals and craft a development blueprint we can own, more importantly, one that gives hope to our people, who have put so much trust in us.”

The movement was unveiled on September 3 to champion the interests of Asal counties ahead of the 2022 General Election. It seeks to unite residents to take a common political position, especially on the 2022 election, and specifically negotiate for greater socio-economic investment and development in the region.

Yatani maintained that the destiny of Asal counties lies in the hands of their professionals.

“We must remind ourselves of our history and circumstances but seek to be defined by the opportunities that lie ahead than by the challenges we have gone through,” he said.

“We should not just be a passing cloud, but instead unite and empower our people. We need to have a brave new beginning if we want a brighter future for our people."

The envisioned blueprint will cover twelve areas deemed critical to the development of the region. They are natural capital, human capital, water, health, environment and climate change, security and conflict, pastoralism, leadership and governance, infrastructure, tourism and hospitality, culture, livelihoods and food security.

Yatani says leaders from the areas must put aside their differences and work together to unite the region against conflict, famine, economic marginalisation and political divisions.

Upya Movement leaders further want to make the formation a coalition vehicle by establishing functional governance structures from the national to grassroots levels.

They want their respective communities to rally behind President Uhuru Kenyatta, ODM leader Raila Odinga and One Kenya Alliance principals.

However, a section of leaders, led by governors Ali Roba (Mandera) and Mohamud Ali (Marsabit), has disowned the initiative.

They have faulted the CS for what they termed “a non-consultative approach to making decisions for the region”.