Most of Jubilee’s Kieleweke MPs have vowed to campaign for the ODM boss to succeed Uhuru. 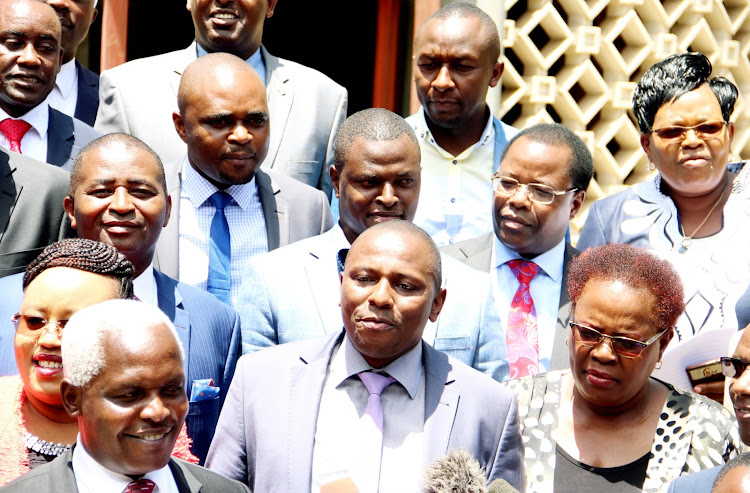 Deputy President William Ruto’s camp is reviewing a list of new aspirants planning to take on their rivals serving as Raila Odinga’s point men in the Mt Kenya region.

Less than a year to the August general election, the Star has established that the DP and his team are silently crafting a line-up that will face off against the Raila allies.

Most of Jubilee’s Kieleweke MPs - who support the handshake between President Kenyatta and Raila - have vowed to campaign for the ODM boss to succeed President Uhuru Kenyatta.

The group is facing a strong wave of the United Democratic Alliance and the DP's allies are keen to have them voted out.

Former Kiambu Governor Ferdinand Waititu, who is facing corruption charges, has announced that he will be flying the UDA flag in challenging Nyoro.

Thika Town MP Patrick Wainaina is also part of those likely to fly the UDA flag.

In Laikipia county, those being positioned to take on Muriithi include former Governor Joshua Irungu and Laikipia West MP Patrick Mariru.

Kinyanjui in Nakuru is facing a stiff challenge from Senator Susan Kihika, who is setting the stage for a bruising battle with the first-term governor. Kinyanjui has announced that Raila is the best bet to take over from Uhuru.

Nyandarua Woman Representative Faith Gitau is being positioned to take on Governor Kimemia.

On Thursday, Waititu, who was impeached by the Kiambu MCAs, said he was ready to battle it out with his competitors during the UDA nominations set for next year.

“I will reclaim my governor's seat on the UDA party and through God’s mercies, I know the people of Kiambu will give me another chance,” Waititu said.

The staunch supporter of the DP noted that cartels pushed him out of office but not the Kiambu electorate.

In Gatanga, lawyer Edward Mureu is in the lead campaigning on the UDA platform as he seeks to dethrone Nduati, a supporter of Raila.

A month ago, while on a tour of Murang’a county, Ruto endorsed Mureu, describing him as a dedicated and good leader.

On Friday, the lawyer said UDA will ensure they have candidates who will promote the hustler narrative and the bottom-up economic model.

“I am in the UDA to stay and in Mt Kenya region, Gatanga is leading with UDA registration of members. I will stick with the DP no matter what,” Mureu said in an interview.

In Kangema, currently represented by Muturi Kigano, UDA has attracted Johnson Mukuha, while in Mathioya Stephen Macharia will fly the UDA flag in the battle against incumbent Peter Kimari, who is leaning towards Raila.

In Maragua, Kamande Wambuku is positioning himself to run against incumbent Mary Waithera.

In Nyeri county where the DP has been facing opposition from two leading Kielweke lights - Ngunjiri Wambugu (Nyeri Town) and Kanini Kega (Kieni) - several aspirants have line up for the coveted UDA ticket.

Karungo Wa Thang'wa, who quit as secretary general of The Service Party, will take on Kiambu Senator Kimani Wamatangi.

Tharaka Nithi Woman Representative Beatrice Nkatha, an ally of the DP, said the Mt Kenya electorate has “already fallen in love with Ruto”.

She expressed optimism that the DP is the best candidate to continue with Uhuru’s legacy.

“I like the DP's ideology of bottom-up and we are sure that our people ranging from mama mbogo, boda bodas to jobless youths will greatly benefit from a UDA government,” she said.

A reliable source said Waithira Muithirania will face off against Murang'a Woman Rep Sabina Chege, who has been drumming up support for Raila. Waithira lost to Sabina in 2017 during the Jubilee nomination.