There has been an ongoing security operation in Laikipia to restore calm following weeks of unrest in the area.

•The rebuilding of homes razed down by bandits in Laikipia is also underway. 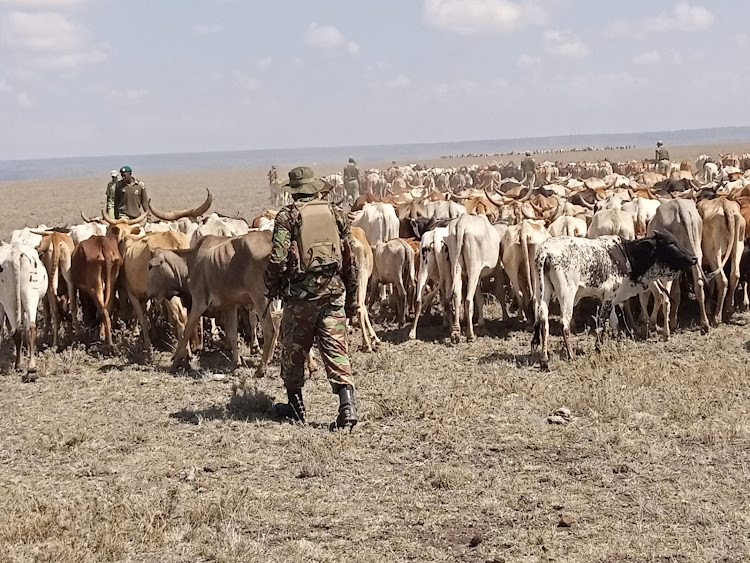 HERDERS RETREAT: Police drive away some of the 1,200 cows surrendered by herders in Laikipia on September 22.
Image: NPS

After days of some stability, Laikipia bandits have struck again.

According to a police report, suspected bandits managed to beat a security dragnet and stole a number of livestock within Ndunyu Village in Kirima Location on Thursday morning. No one was injured.

In a statement on Thursday, National Police Service said a multi agency team composed of NPS and KDF is pursuing the suspects with efforts to recover the animals.

"The government wishes to assure residents of Laikipia that no effort will be spared to ensure the culprits are brought to book. Further reminding anyone trying to disrupt peace within the area that their days are numbered," NPS said.

In an update on Friday, the NPS said its officers have managed to recover all the stolen livestock and return them to the owner.

Two weeks ago, Police Spokesman Bruno Shioso said bandits who had invaded the Laikipia Nature Conservancy had been driven out with their livestock.

There has been an ongoing security operation in Laikipia to restore calm following weeks of unrest in the area.

"This is to reassure the victims of violence of their utmost security and safety, including that of their property. As such, much of the security enforcement is within such affected settlements," Shioso said.

The rebuilding of homes razed down by bandits in Laikipia is also underway.

The CS expressed confidence with measures undertaken so far to restore calm.

[PHOTOS] Reconstruction kicks off in Laikipia as normalcy returns

At least eight people have been killed in the conflict, houses torched.
News
7 months ago
by SHARON MAOMBO Business Writer
News
30 September 2021 - 12:07