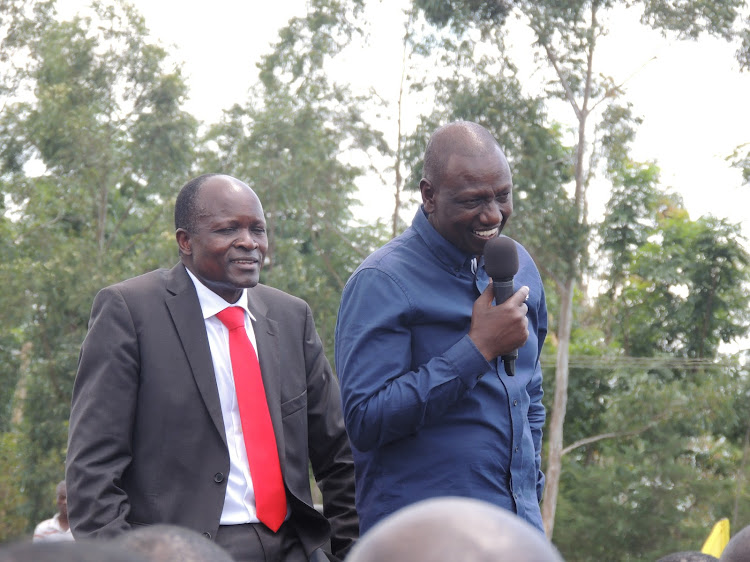 Ruto will this weekend launch a charm offensive on Raila's Nyanza backyard with a major rally to be held in Awendo town, Migori county.

Awendo is one of the constituencies that resisted the strong ODM wave in 2013 and elected a Ford Kenya candidate Jared Kopiyo who has since joined the DP's hustler movement.

The former lawmaker, who is currently serving in Migori county government as the chairman of the County Public Service Board, will host the DP.

“We will have a funds drive at the church. The church had requested for this in the past and due to tight schedule and Covid-19 restrictions, we have been postponing it until Saturday,” Robi told the Star on the phone.

The MP confirmed they will host Ruto together with Kopiyo.

“I will arrive with Ruto from Nairobi in a chopper and we will be received by Kopiyo and other leaders allied to United Democratic Alliance in Migori and Nyanza region. We plan to address the crowd after the funds drive or a major greeting of people in Awendo town,” Robi said.

Ruto has visited Migori county several times in the past but majored his trips in areas dominated by the minority Kuria community.

Apart from tours of Kuria East and Kuria West constituencies, the forays left out the majority Luo community in the other six constituencies where ODM enjoys massive support.

Robi said they are confident they will manage to push Ruto's bottoms-up agenda in the Luo Nyanza regions.

They hold that the Awendo tour would give a snowballing effect in the area.

“The next government will be formed by UDA and Ruto at the helm. Most voters and leaders in Nyanza are aware of this and they are struggling to find a space with us which we have given with an open hand,” Robi said.

He said in Migori, they have already set the target of registering 200,000 new UDA members adding that they have been buoyed by positive results in the ongoing listing.

“Kopiyo's defection to our camp has given us momentum. We are also working closely with other like-minded smaller parties in Nyanza. We are sure we will turn the table on Raila and ODM in the region because voters are tired of backing a candidate who always loses,” Robi said.

Kopiyo was hosted by Ruto at the DP’s official Karen residence in Karen, Nairobi on Thursday.

However, in a statement to the press, the former lawmaker distanced himself from joining UDA saying he was yet to make his mind on his 2022 political move.

The MP lost as an independent candidate in the 2017 polls when he was floored by ODM lawmaker Walter Owino.

Speaking to the Star, Owino said they will not grace Ruto’s function but urged for calm during the DP's visit.

“Ruto is free to come to Awendo and sell his development and political ideology because that is the same reception we want all politicians to get across the country ahead of the 2022 General Election. We also wish local and regional political leaders who will host him well. They won’t be missed in ODM,” Owino said.

The MP cautioned Ruto to desist from insulting local leaders and issuing inflammatory statements targeting Raila and the ODM party "like he has been doing in the past to avoid confrontation with locals."

“We believe there is a democratic right for leaders to associate with electorates and we wish he has a peaceful meeting, though he will just be a political tourist as Migori is solidly behind Raila and ODM party,” Owino said.

Migori Senator Ochillo Ayacko said Ruto was free to pray in any church in Kenya insisting that politically, DP’s visit is null and void.

His sentiments were shared by Uriri MP Mark Nyamita who said Ruto's visit to Awendo “will be tolerated for sake of peace and open democratic space as they will keep off, but his negative handling of the Luo community and region while in Jubilee will not add him votes.”

“We are aware there are several leaders in Migori who will host him, including others who will send their representatives but we are not worried as the mandate of Migori and the region will stay with Raila Odinga and ODM,” Nyamita said.

Ruto’s Saturday meeting comes only a day after Kanu members were hosted to a fundraiser at Ageng’a Secondary School.

Raila’s spokesman Denis Onyango and other local ODM leaders played host to the visitors. Gideon did not attend in person but sent his allies.

The Baringo senator had a private meeting in Laikipia county, according to Gordon Ogola who is the national Kanu secretary for justice and administration. He represented Moi at the Migori meeting.

Moi was also to meet Kanu party delegates in Migori and about 20 aspirants from the area ahead of the delegates conference on September 30.

With Ruto in Migori, all eyes will be on Governor Okoth Obado who has publicly disassociated himself from Raila and rejoined the People's Democratic Party.

PDP party leader Omingo Magara has been openly drumming up support for Ruto after the party went into a joint pact with UDA.

Obado has for some time downplayed his association with Ruto, insisting PDP will just open the democratic space in Migori and Nyanza region.

Several Migori leaders who are politically associated with Obado, including Kopiyo, have been openly campaigning for Ruto.

Obado has declared interest in the presidency through the PDP party, a plot said to be aimed at ensuring Raila’s Nyanza backyard does not vote as a bloc.

By the time of going to the press, Obado had not confirmed if he will attend the Awendo function or send a representative.