Mutinda's piloting dream so near, yet too far

His mother has raised only Sh2.5 million of the Sh6 million required for training

•  “I joined Kenya School of Flying on October 14, 2018, I have undertaken the piloting course for one and a half years now. My dream is so near, yet too far,” Mutinda said.

•  He has since joined the mother in running her hotel at Industrial Area, with hopes that he will one day raise the Sh3.5 million and resume his studies. 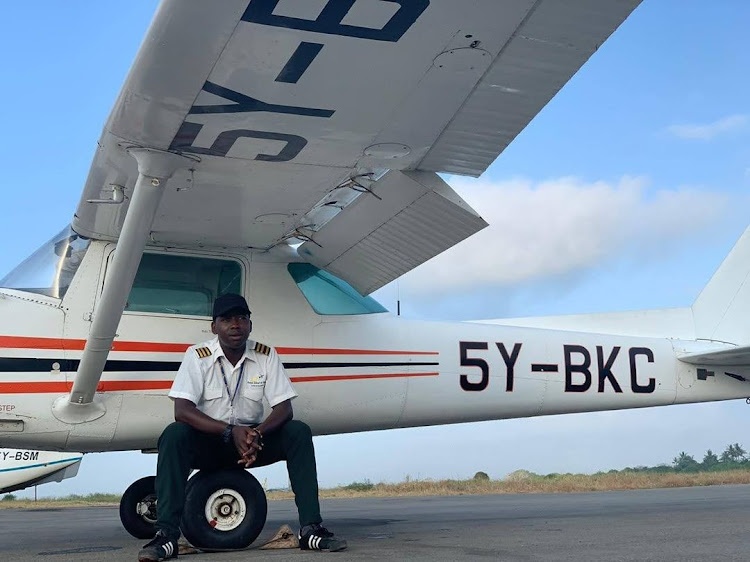 SH3.5 MILLION FEE ARREARS: Earnest Mutinda during one of his training sessions at Kenya School of Flying in 2018.
Image: COURTESY

A Sh3.5 million school fee debt stands between Earnest Mutinda and his dream of becoming a pilot.

Twenty-year-old Mutinda, a piloting student at the Kenya School of Flying, was forced to stay at home after his mother failed to raise the Sh6 million required by the institution for his training.

Mutinda says he has been home since July 2020. His mother, Ruth Wambua, said the firstborn son was sent home for the fee after she ran out of income.

The Covid–19 containment measures interfered with her hotel business, hence she couldn’t raise the money.

The widowed mother of two boys on Wednesday said she had already paid Sh2.5 million and is left with Sh3.5 million as pending arrears for her eldest son to complete his course.

Mutinda said he was worried as his future was oblique given the fact that he could no longer attend his classes.

“I joined Kenya School of Flying on October 14, 2018, I have undertaken the piloting course for one and a half years now.

"My dream of becoming a pilot is so near, yet too far,” Mutinda told the Star at her mother’s rented house in Makadara, Nairobi.

He has since joined the mother in running her hotel in Industrial Area, with hopes that he will one day raise the Sh3.5 million and resume his studies.

Mutinda said his widowed mother had been struggling to educate him through the professional course after his father died in 2017.

“My father died a day prior to my KCSE exam. I sat my papers while his body was lying in the mortuary but excelled. Life has never been the same since his demise,” he said.

Mutinda’s younger brother is in Standard 8 at a school in Makueni county, he will be joining secondary next year.

“I feel so bad growing up struggling to make my dreams come true. I should be flying now but I am at home.

"I have friends with whom I began the course and they are almost done with the first phase of their course,” Mutinda said.

Mutinda said the course includes a private pilot licence and commercial pilot licence, with the former being the first phase.

"The second phase is Commercial Piloting Course that involves flying 155 hours above the 45 Private Pilot License hours, each hour costs 14,360.

"There is also an additional three hours for the General Flight Test charged at Sh14,360 per hour. Commercial Piloting License Ground School costs an additional Sh60,000.

The third and final phase, Multi/IR ratings take about two months, according to Mutinda.

Documents seen by the Star indicated that Mutinda had paid Sh2.5 million towards his fees. His mother Wambua said she was overwhelmed with the fee after exhausting all the money she had.

“I have utilised all my savings and even sold several of my properties towards my son’s professional training.

"I have nothing more to sell despite our wishes that he completes his course to become a professional and qualified pilot,” Wambua said.

She called on well-wishers to come to her aid and help raise the Sh3.5 million for the son to complete his studies.