Alarm as vehicles ferried across Likoni channel not weighed

• An audit has revealed the toll collectors rely on information provided by drivers regarding the state of the load in the  vehicles – about 6,000 daily. 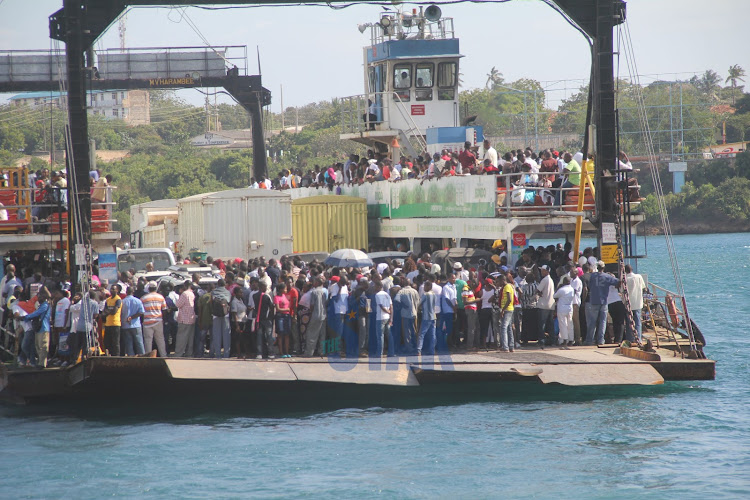 Vehicles transported across the Likoni ferry channel are not weighed as required, eliciting concerns about the safety of the over 360,000 people using the facility daily.

An audit has revealed the toll collectors rely on information provided by drivers regarding the state of the load in the  vehicles – about 6,000 daily.

Auditor General Nancy Gathungu revealed the anomaly in her review of the Kenya Ferry Services books of account for the year ending June 2019.

An audit inspection, she said, revealed the weighbridges put in place for the job were not in use, despite being installed at over Sh26.8 million.

“There was no evidence that all motor vehicles carrying cargo are inspected to confirm the state of load carriage before payment is made,” she said in a report tabled in Parliament.

Loaded motor vehicles are charged at different rates from empty ones, with Gathungu casting doubt on the Sh549 million collected by KFS in the year under review.

“An inspection revealed that although the weighbridges were integrated with the revenue system on both sides of the channel, they were not in use as KFS does not use them to charge for use of ferry by motor vehicles,” the auditor said.

Kenya Ferry management indicated the weighbridges were installed as a control measure to enhance safety by estimating the weight of motor vehicles boarding ferries at the channel.

“Consequently, it has not been possible to confirm the propriety and value for money from the expenditure totaling Sh26.8 million incurred in the installation of weighbridges,” she added.

Safety of ferries has been a cause of concern for many transport stakeholders, especially after the death of a woman and her child whose vehicle slipped off the ferry in September 2019.

The incident created a national uproar over safety and emergency response at the channel, with further reports indicating some of the ferries had since been declared unseaworthy.

KFS managing director Bakari Gowa once told Parliament that each of the six vessels has specific types of vehicles that can be loaded.

Away from the safety concerns, the auditor has raised concerns over the delays in the delivery of two new ferries whose procurement began in August 2015.

KFS Limited awarded a contract for supply and delivery of two new passenger ferries at Sh1.9 billion of which a down payment of Sh598 million was paid to the local agent.

As per the contract signed in June 2015, the new ferries were to be delivered after 17 months but the first ferry was delivered in July 2017.

The second ferry was delivered in April 2020, a delay of about five years, of which Kenya Ferry Services has already paid Sh1.5 billion with the contractor owed Sh239.5 million as at the same date.

“In light of the foregoing, and as a result of the undue delay, it has not been possible to confirm the value for money for the building and supply of the two new ferries,” the auditor said.

Kenya Ferry Services has also been cited for non-submission of statutory deductions among them Sh17.7 million owed to the Kenya Revenue Authority.

Also flagged are unpaid supplies of Sh146.7 million in respect of trade creditors with Gathungu saying the situation amounts to a breach on the part of the transporter.

“Management has not provided explanations for failure to remit the statutory deductions as required by the Income Tax, Cap 470. The unremitted amount attracts interest and penalties,” the auditor warned.

Management efforts to get the signature were fruitless as evidenced in a latter by the Transport PS requesting for the signing of the financial statements.

The chairman and board of directors’ appointment were revoked through a gazette notice published on October 16, 2019 after a car slipped off MV Harambee causing the death of a woman and her child.

The President has invested in excess of Sh3.6 trillion on infrastructure in the region since 2013
Counties
1 month ago
by MOSES ODHIAMBO Political Writer
News
14 September 2021 - 23:00