Abdiwahab Sheikh Abdisamad, 55, is the latest victim to be picked by people suspected to be police officers.

• KInoti assured the leaders that he will investigate the individual cases and give them feedback in seven days.

• Haki Kenya boss Khalid said despite consistent efforts to pressure the state to observe human rights, the situation has been worsening. 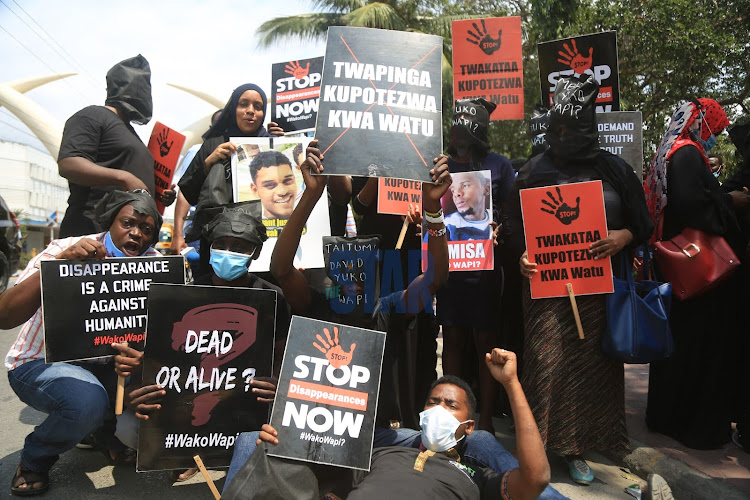 Yasir Mahmud had worked for the government in Mpeketoni, Lamu county, as an ambulance driver for 15 years until 2pm on June 19.

He was on duty when he was stopped by people in police uniforms in the Witu area. The ambulance was towed to the Mpeketoni police station.  The family of the 40-year-old husband of three and father of eight children has yet to see him three months on.

His uncle Wasim Abdulmajid told the Star that Mahmud’s family has filed a habeas corpus application in court to compel the police who arrested him to produce him, dead or alive. They suspect he was picked by anti-terror police officers on suspicion of terror connections.

“All efforts to get my nephew has failed. The state should produce him in court and charge him with whatever offence he has committed and let him a chance to defend himself,” Abdulmajid said.

“If he is accused of terrorism, yet he has worked for the Kenyan government for all that while, then the state should at least tell his family of his whereabouts so that they get closure and know where their loved one is.”

His nephew's case adds to the long list of disappeared people, especially from the Muslim faith whose whereabouts cannot be traced.

Abulmajid was part of a delegation of Muslim leaders and human rights activists who met DCI boss George Kinoti on Friday afternoon to seek answers on the rampant cases of enforced disappearances.

Abdiwahab Sheikh Abdisamad, 55, is the latest victim to be picked by people suspected to be police officers.

The Muslim preacher and scholar had come from evening prayers when he was seized by unknown people on Wednesday in Nairobi's CBD.

The group that met Kinoti comprised Supkem boss Hassan ole Naado and Haki Africa executive director Hussein Khalid. They told the press that their meeting was productive and meaningful.

They said Kinoti promised them to visit the Coast in a week's time and give them answers on the many cases of disappearances the community has encountered.

"The director promised to personally take interest in investigating the cases and apprise us on the progress or outcome in seven days time," Naado said.

"We are also Kenyans and we must enjoy equal protection before the law. If anybody is accused of any offence, they must be accorded due process of the law."

He complained that "a worrying trend was emerging where Muslim personalities are getting picked and their families see them no more or later pick their decomposing bodies. This is totally unfair because we are in this country by right."

Haki Kenya boss Khalid, for his part, said despite consistent efforts by his outfit and other players to pressure the state to observe human rights, the situation has been worsening.

Khalid termed it important for Kinoti and his team to move with speed to assure the affected families of where their loved ones are to allay fears.