Girls managed to come from behind, break-even and even slightly surpass their male counterparts in enrolling for secondary education 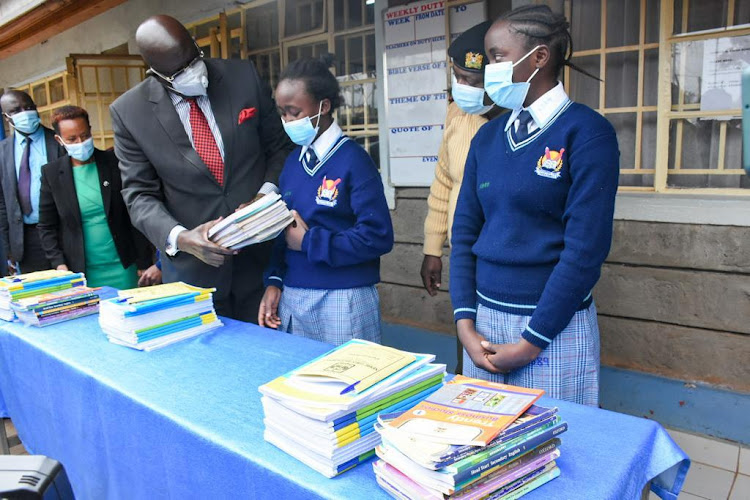 100% TRANSITION: Education CS George Magoha hands over Form 1 textbooks to Mercy Wambui during a mop up exercise to ensure all Form 1 students report to school on September 1.
Image: MERCY MUMO

The population of girls in secondary schools has now surpassed that of boys breaking the age-old dominance of male students pursuing an education.

Data released by the Kenya National Bureau of Statistics on Thursday shows in the last five years, girls managed to come from behind, break-even and even slightly surpass their male counterparts in enrolling for secondary education.

Out of this, 1.77 million were girls while boys enrolment stood at 1.75 million learners.

The increase in population is credited to the compulsory transition from primary to secondary schools under government for 100 per cent transition.

In 2019, there was a sharp increase in enrolment pushing the numbers to an all-time high of 3.2 million learners but that was surpassed in 2020 when the population hit 3.5 million.

Primary schools on the other hand witnessed a slight increase in the number of students enrolled.

The Star has yet to confirm what caused the decline of schools.

The report was released on Thursday by Treasury CS Ukur Yatani, and comes in a backdrop of the coronavirus pandemic that was forecasted to ravage the economy, however, the CS argues the contrary was witnessed.

He further said the full resumption of activities in the education sector that was almost halted for the better part of 2020, is likely to significantly boost the growth.

There were three new teacher training colleges over the same period while that of national polytechnics increased by one.