It costs as little as Sh1,000 a month to prevent HIV

• This is the first costing analysis of public sector PrEP provision in HIV care clinics, where the majority of PrEP clients in Kenya receive services.

• Kenya rolled out Prep as a national programme in the public sector in May 2017, becoming the first African country to do so. 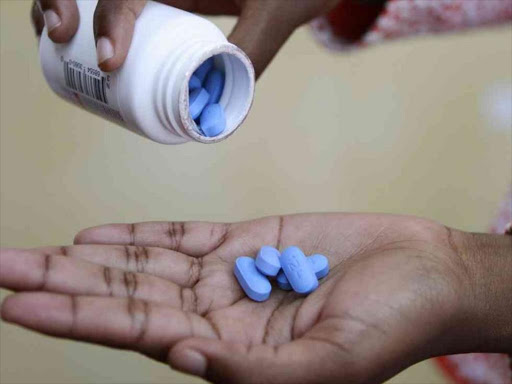 The cost of providing HIV prevention drugs in Kenya could go as low as Sh1,000 per person every month, a new assessment shows.

This makes the pre-exposure prophylaxis a cost-effective way to prevent HIV, especially among key populations who are at high risk.

The analysis by multiple researchers shows that in 2017, when Kenya introduced PrEP in 25 HIV-1 care clinics, about 2,567 persons were initiated.

The majority (69 per cent) of financial costs were attributable to the drugs, followed by administrative supplies (17 per cent) and training (nine per cent).

“Negotiation of lower prices may improve the financial feasibility of this highly effective prevention method,” the researchers recommend.

Their findings, titled “Low costs and opportunities for efficiency: a cost analysis of the first year of programmatic PrEP delivery in Kenya's public sector”, are published in the BMC Health Services Research journal.

This is the first costing analysis of public sector PrEP provision in HIV care clinics in Kenya, where the majority of PrEP clients receive services.

Kenyan researchers who took part in the study were from Kemri, Jomo Kenyatta University of Agriculture and Technology, the Ministry of Health and Partners in Health and Research Development, a Nairobi-based non-profit organisation.

“The cost to clients of monthly refills was particularly high; efforts to enact a quarterly visit schedule would reduce the cost burden to clients, as well as, to a lesser extent, the healthcare system.”

PrEP only needs to be taken consistently for the period users are at risk of infection. In contrast, delivering ARVs to people living with HIV costs about Sh20,000 a year. The drugs must be taken for life.

If taken as prescribed, the pre-exposure prophylaxis drugs provide 100 per cent protection against HIV.

However, a separate analysis by the Ministry of Health this year showed that because of poor adherence, 65 Kenyans have contracted HIV while consistently taking the PrEP since 2017.

Nam-Aidsmap, a UK-based charity, in its analysis of the findings, said some could have acquired HIV during a period of poor adherence or drug supply interruption.

Kenya rolled out PrEP as a national programme in the public sector in May 2017, becoming the first African country to do so.

Medical experts say there is no consistent data on how many people are using PrEP, as a significant number take it only to have risky and unprotected sex and then drop out.

The 65 cases happened between 2017 and 2021, but there could be more people who have become infected and were not documented.